HELLO, FRANDOS. I haven’t popped by here much over the last couple weeks because — well, there was a lot of important stuff going on with the protests over George Floyd’s death, and I just didn’t want to mist everyone with whatever aerosolized sewage you’d get from me, and further, I was on deadline finishing a book (Dust & Grim, the MG novel). That said, though I hope my stand on all this is clear, I support Black Lives Matter, I support the protests, I support defunding the police. Black Americans live a life entirely separate from white Americans in terms of their interactions with not just the police, but every dominant socio-cultural system. These are egregious faults which must be corrected and that currently stack to protect white privilege. As the saying goes, it is not enough to merely be not racist, but we must be anti-racist. If you’re white, you’re probably racist, and I believe it’s best to operate from that standpoint — no, I’m not suggesting you’re actively racist, seeking to do harm, but rather I’m saying that you have long benefitted from a system of bonuses and bennies exclusively for white people, and the very air around us is culturally suffused with a whole lotta racism, and we breathe it in, and we swim in it, and we unconsciously take some of it in and it is on us to recognize that, see that it is wrong, and do our best to untangle those nasty hidden knots inside us.

Further, given that J.K. Rowling has really chosen this moment to roll around in a mud-puddle of her own dead empathy, while again I’d hope my viewpoint here is known, I find no harm in reminding and restating: trans women are women, trans men are men, non-binary individuals are whatever gender expression they are, as well — and we must commit not just to these simple statements, but to undoing all the systemic prejudices that exist against our transgender and non-binary friends, whether in health care or safety or education or careers or — well, it’s a list that covers all aspects of daily life. As a call to action, here are some links you might click that will help you part with some essential donations:

AND with these things, remember that this is not a fight du jour, but rather, one that is ongoing in both our culture and inside your own damn heart and mind. So keep the vigil, hold the line. Okay?

All that being said, usually I was calling these random scattershot blog posts DISJECTA MEMBRA, which is awful dang fancy and ooh-la-la, but honestly, it’s far too high-minded for the kind of word-hurk I’m chunking up, so instead I’m going with gabbling into the void. So, here we are, gabbling into the void once more. A blog post turned to viscera and slopped upon your information plate.

I saw a fox this morning. And a pileated woodpecker. Though I’m no longer writing in the woods as I once was, it’s nice to still be surrounded by a good bit of nature. Nature is soothing. Not that nature’s job is to soothe me, obviously, but I AM SOOTHED JUST THE SAME. The loud rappa-tap of the woodpecker’s beak. The gentle bounding of a fox. The soft squirrel I use as a loofa. What? Shut up. Squirrel Loofas are totally the big thing. Also the name of my new band.

School is now over for the not-so-tiny human. That’s both amazing, because school for the last couple months was… more like half-school, through no fault of anybody, it’s just circumstances. But it took a lot of work to schedule all that stuff, and effectively, everything became homework. Because school was home and home was school. And it necessitated a lot of work on our parts, too because though we weren’t teachers… we totally had to be teachers. (My wife far more than me, to be clear.) So! Summer is welcome, but with it comes the new challenge of OH GOD WHAT THE FUCK DO WE DO NOW. The days are long and the time is weird and we can’t just go on vacation or really even do most of the things we’d do. Sure, our county here in PA has gone from red to yellow (and maybe soon to green), but the virus didn’t go away, and we’re seeing a second surge rise — it could go poorly quickly, and blergh. So, now we have to supply structure for the summer, somehow. In some way. In a way that isn’t forced and is also fun. Maybe we just plug our son into a VR simulator and occasionally spoon-feed him nutrients? That can work, I’m sure. Bonus, he can power our home with his human energy! This is a very original idea and nobody has ever had it before and nothing can go wrong.

Just a casual reminder that COVID-19 is still serious shit. We’ve friends who have had it for weeks, even months, with lingering symptoms. One friend of the family had it, recovered, then developed bizarre personality-changing neurological symptoms that have only worsened — finally they figured out it was autoimmune encephalitis, likely a result of the virus. Neurological symptoms can persist and… we don’t know if everyone comes out the other side unscathed. Death isn’t the only thing this does. Take it seriously. Wear a fucking mask, embrace social distancing, stay frosty.

I’m still on my bread bullshit. I’ve had some spectacular failures. I had one loaf of sourdough taste so vinegary, you’d think you were drinking pickle juice. I had one sandwich loaf come out like a brick, a goddamn brick. (It tasted good, at least.) One was too tough, and from it I made bread pudding that was great. Been trying to make sandwich bread and finally, finally did so, with spectacular result: 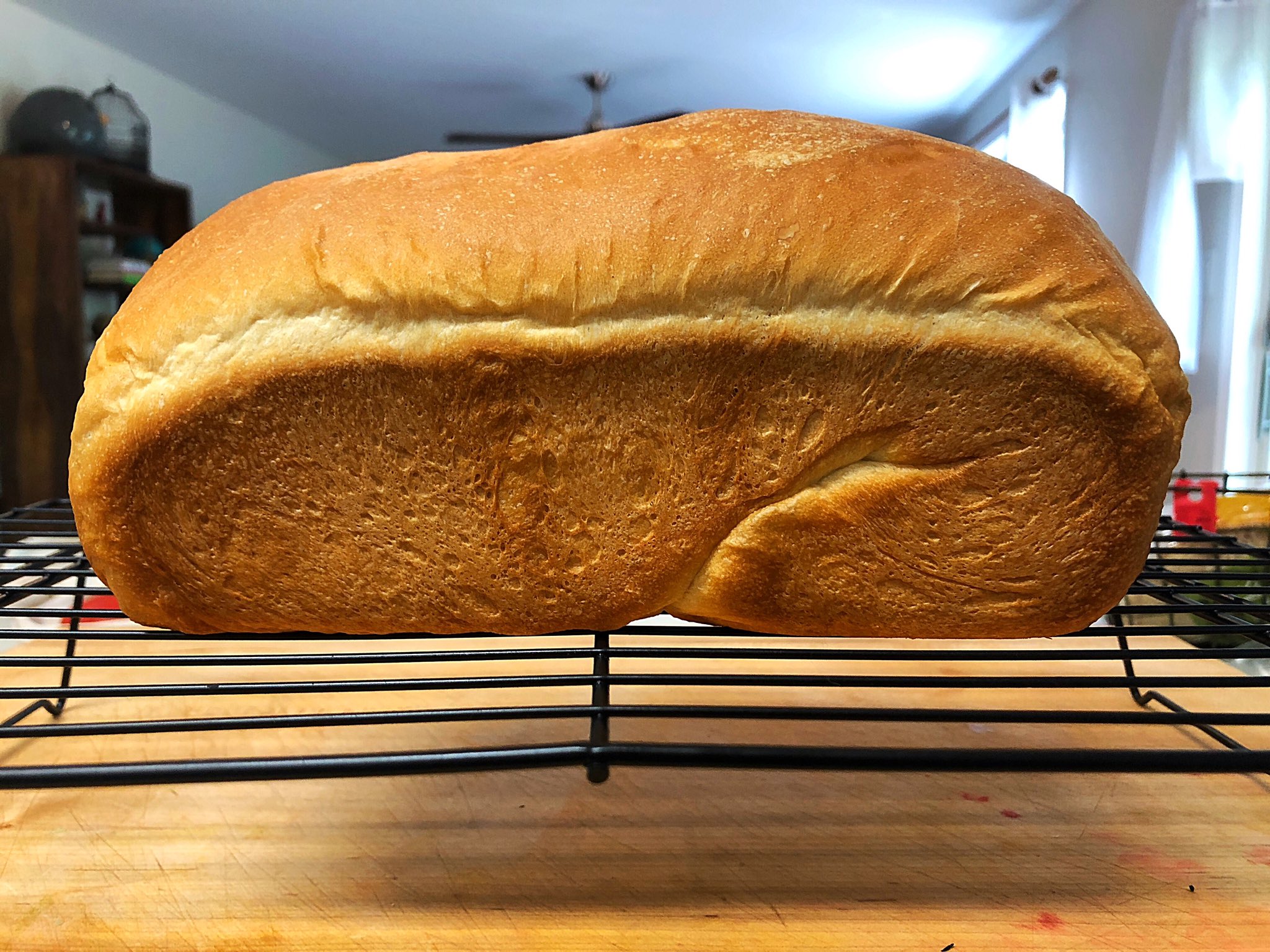 There are good cartoons and you should watch them. First, Avatar: The Last Airbender is on Netflix again. HBO Max has the Ghibli films. Craig of the Creek is killing it this year. Kipo and the Age of Wonderbeasts is back… this week I think? There’s gonna be a We Bare Bears movie at the end of this month. All fun, funny storytelling at the top of its game. Good with kids or without, I’d wager.

AAAAANYWAY, here are some photos. Bye.