Polls show that you were optimistic about the probability of another rally for top metals. Both of them go well with the maps that I shared earlier this month. Let’s see, in the updated charts below if they are going to justify your bold expectations.

Gold is the first as it has a stronger position now. 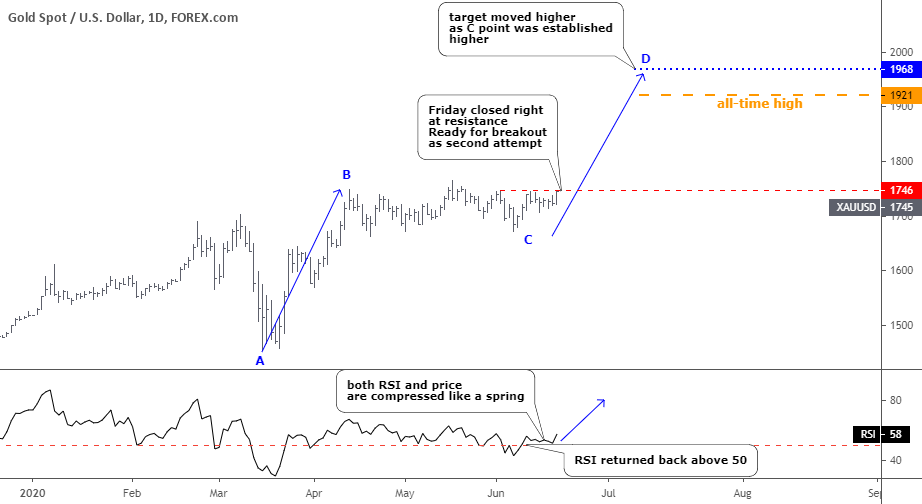 The top metal completed the sideways consolidation that I showed you two weeks ago. It didn’t touch the 38.2% Fibonacci retracement level at $1636 as it stopped at $1671, which is even higher than the first leg of this corrective structure, which was established at $1661. It is an entirely natural outcome as the last leg down started at $1766, also higher than the top of the first leg did at $1748. The second leg down was longer ($95) than the first leg ($87).

I set the upside trigger at $1746 last time. On the 11th of June, gold almost kissed that level but failed to proceed. Now it’s the second attempt. The RSI is back above the crucial 50 level. Both the price and the RSI were compressed within a minor consolidation and are ready to go higher. Gold is just waiting for the sound of the starting gun.

The target was relocated higher now as the C point was established at a higher level, either with a not so deep dive of the consolidation. The D point was set at the $1968, which is higher than the all-time high, but the former would offer a strong barrier anyway.

Let’s check in on Silver.

The consolidation on the silver chart was classic compared to the irregular structure of the gold chart above. Both legs are almost even here ($1.18 vs. $1.26), the slope is to the downside, beautiful.

Silver is “begging” the market for a second chance. Last time I warned you, that “The price could touch or even briefly pierce the downside of the blue uptrend channel, but it shouldn’t break below it.” This one came true as price indeed pierced the downside of the channel several times, but this “guy,” he’s not cut like that. The market pushed it back in the trend channel as silver was clinging to life.

Look at the RSI sub-chart below as this good indicator remained above the crucial 50 level, although it kissed the latter. This offered strong support for the crawling price.

This time I added the second target to the old one at $18.94. It is located at 1.272 of the distance of the first move up, which was finished on the 14th of April. The price should hit the round number level of $20 to reach that target.

Disclosure: This contributor has no positions in any stocks mentioned in this article. This article is the opinion of the contributor themselves. The above is a matter of opinion provided for general information purposes only and is not intended as investment advice. This contributor is not receiving compensation (other than from INO.com) for their opinion.