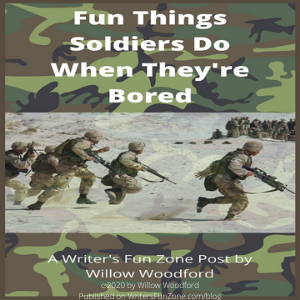 Let’s welcome back monthly columnist Ann Woodford as she shares with us: “Bored Soldiers: Bring Humor to Your Military Genre Story.” Enjoy!

Military fiction pulls up even more stories about soldiers. They are a thick thread in the fabric of America.

I was a military spouse for ten years before my husband left the military because of PTSD. In that time, I saw behind the ultra-cool exterior of soldiers to their fun loving, prankster and sometimes slightly immature side. And believe me, even the most serious soldier has one to some degree.

I was talking with a fellow author the other day who was looking for silly things soldiers do when they aren’t hiding, spying and fighting. They tend to do a lot of that!

This is an actual list of things soldiers I have known did when they were bored. I’ll offer context when I can.

For a Belly Laugh

These are the ones that have made me belly laugh:

So, when you’re writing your soldiers remember they have a funny and sometimes very immature side as much as a serious, down to earth side.

The soldiers I knew were amazing men, fathers and husbands, many of them were Special Operators or Special Forces. And I’d trust my life with any one of them. But even the bravest, most serious soldier has to cut loose and have fun sometimes.

One final addition that isn’t so much fun as interesting.

My soldier friends did other things too.

They aren’t silly or pranky, but interesting nonetheless.

One friend didn’t like the food they were eating so he had his grill sent over, got food from the dining hall, and other, local, sources, and cooked for his crew. He even made them pies.

Of course, one pie was served with shaving cream for whipped topping, but hey, it was a pie.

Another one who ended up with a lot of free time used his building skills. Let me preface this by explaining that in the military everything is shipped packed in plywood. That plywood is then thrown away or burned. This guy managed to get his tools sent over to him and built stuff.

All their tents had decks and furniture. Each soldier had a shelf and a bedside table for his cot and most of the tents had wood floors.

Never underestimate the creativity of a bored soldier. Never.

One last note, the soldiers I knew, and am referring to, were mostly in special forces or special operations. They get a little more leeway in what they’re allowed to do. And they have regular resupply missions, usually managed by their unit. This means they can request personal items with the assurance they’ll be handled by people they know and trust. And the supply missions are very regular.

Do you have other questions about the military?

I was a military spouse for 10 years and my husband served 6 of those in special operations. Reach out, if I can answer I will. If I can’t, I’ll let you know I’d have to kill you if I told you. JK

Ann Woodford is the real-world sister to Willow Woodford. She’s a grad student and blogger, and in her spare moments she helps authors connect to their audiences. Let Woodford Creative help you be a Siren in an ocean full of mackerel. Connect with Ann and Woodfood Creative here: fb.me/woodfordcreative.