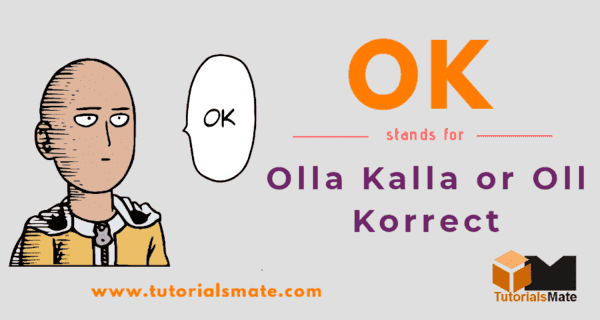 We notice most people who use the word ‘Ok’ regularly. But, I can bet that most people do not know the full form of ‘OK’. Another question that most people think is the difference between ‘OK’ and ‘Okay’. We all know what this word actually means – it’s a verbal thumbs-up to express agreement.

What does OK stand for?

OK stands for “Olla Kalla” or “Oll Korrect” which is a facetious misspelling of “all correct”.

The word ‘OK’ is basically used to denote acceptance, approval, agreement, and acknowledgment. Some other variations include “sounds good” and “that’s fine”, etc.

OK is also an abbreviation for the state of Oklahoma, U.S.

Where does OK come from?

The exact origin of OK is not clear, but the most popular theory states that OK was first written in the Boston Morning Post in March 1839 in reference to the Anti-Bell-Ringing Society passing through Boston on their way to New York. At that time, people started making fun of words and phrases and pronounced “oll correct” for “all correct”. Later, they shortened it to the initials ‘OK’.

However, the term gained popularity in 1840 during Martin Van Buren’s presidential campaign. Van Buren was nicknamed “Old Kinderhook”, as his place of birth was in Kinderhook, New York. He used “Vote for OK” as his campaign slogan. Although he lost the election, OK remained popular and spread.

What is the meaning of Okay?

The term ‘Okay’ is nothing but a different form of ‘OK’. The word ‘Okay’ has the same meaning as ‘OK’. Both of these terms can express agreement, check for understanding, change the topic, and verify that things are all right.

Other Forms of OK

There are some other forms of ‘OK’ that most people like, such as:

Apart from this, people also use OK emoji while chatting on messaging.

Although people use these forms to their liking, the more correct form is ‘OK’ because it is actually abbreviated.

When messaging or chatting on social media, people use ‘OK emoji’ instead of typing ‘ok’. Almost all messaging platforms provide support for using OK emoji, even it comes preinstalled with many messaging applications or web platforms.

A variety of emojis are used in chat. Some of the most common OK emoji are shown in the following image:

Difference between OK and All right

‘OK’ is a synonym of ‘All right’ (sometimes referred to as alright, especially when speaking). The slight difference between ‘OK’ and ‘All right’ is that ‘All right’ seems more formal. This is because ‘All right’ is not considered as ‘slang’ like ‘OK’ is.

How is OK used?

The word ‘OK’ may be the most frequently spoken or typed word on the planet. It is a very common term used in the middle of a conversation when we agree with another.

The following is a simple example of a conversation:

Instead of just saying OK, one should try to answer using different words, so that it is more formal, polite, or precise.