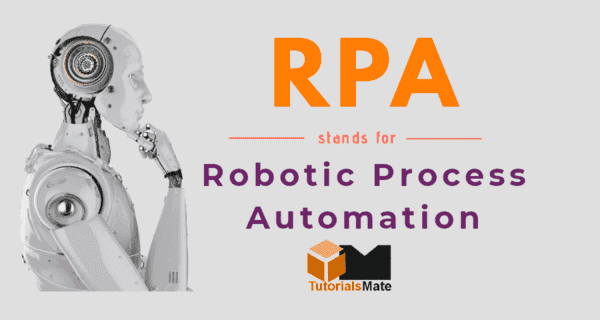 The term RPA is commonly used in the field of automation. Most organizations are adopting RPA to increase the simplicity, efficiency, and reliability of their business processes. But for the general user, the question is what RPA is and what the full form of RPA is. Let’s discuss it:

What does RPA mean?

RPA stands for “Robotic Process Automation”, where these terms state the following:

RPA is a technology that basically uses different software or programs to mimic human actions. The technology can be used to automate those manual tasks or processes that are repetitive and rule-based. Few examples of such processes are Data entry, Data validation, Invoice generation, etc.

When was RPA invented?

RPA is not a newly innovated technology, the term ‘RPA’ emerged in the early 2000s. According to sources, the initial development was started in the 1990s.

The technology combines different technologies under one toolkit to perform different automation tasks. Machine learning is considered as the first step towards the innovation of RPA. Constant developments took place to further establish this technique.

The history of RPA suggests that the three predecessors of RPA are:

This is the biggest question for organizations when they plan to implement RPA. As this emerging technology also has some disadvantages, but the advantages of RPA overcome those disadvantages.

As we know that RPA is implemented to automate manual tasks with the help of software and tools, it helps to reduce workflow time. The reason for this is that RPA bots are much faster than humans and they can perform the tasks without taking any time gap or interval. Besides, a human needs rest and time for eating food and other routine activities.

It helps organizations to utilize the maximum potential of the human brain because they can focus on processes and tasks that require intelligence, logic, judgment, and interaction with customers rather than simply performing repetitive tasks.

Besides, RPA has many other benefits, such as:

Where can RPA be implemented?

RPA bots typically interact with web applications, programs, websites, Excel worksheets, emails, etc. and follow metrics or mimics assigned to it. It is currently the most efficient automation solution for organizations. Previously the technology was best suited for IT sectors, but now it can be applied in many areas, with the processes described below:

I) General business processes and activities

V) Robotic process applications for personal use (such as digital assistant)

The technology is expanding very rapidly due to its advantages over manual functions. According to estimates, the RPA is expected to have an economic impact of approximately $ 6 trillion by 2025.