At the beginning of the year, while envisaging a pre-COVID season, Dave Rennie explicitly highlighted that Michael Hooper would need to earn his starting Wallabies position and captaincy, which had previously been bestowed without question.

Rennie’s motives to pressure Hooper’s performance are admirable, although his decision is widely criticised due to Hooper’s 100-plus Test caps of experience at an international level.

Nevertheless, the first game of the reformed Australian domestic competition has proven that Rennie’s decision to base Hooper’s selection into the starting Wallabies side on performance has breathed life into his fellow flanker countrymen.

This chance to represent Australia and play under a Rennie-led Wallabies side has created a domain for healthy competition.

Throughout the first game of the reformed Australian domestic competition, which featured a Reds versus Waratahs match-up, Hooper failed to rally around his team and lead from the front as he usually does in close finishes such as this one.

He conceded a crucial penalty in the 70th minute that would have put the Reds in the driving seat, if not for their continued goal-kicking woes.

There is a range of factors that may have impacted his performance, especially since the outbreak of COVID has greatly affected rugby as a whole to the extent that we are granted an unprecedented series of events that weigh heavily on the players.

However, it should be highlighted that in this particular match, competition for a chance to receive the honour to represent Australia in Rennie’s Wallabies pack ramped up. What was most intriguing is that the younger players were the ones that have stepped up to the challenge of taking on the Wallabies’ regulars and appeared comfortable doing so. 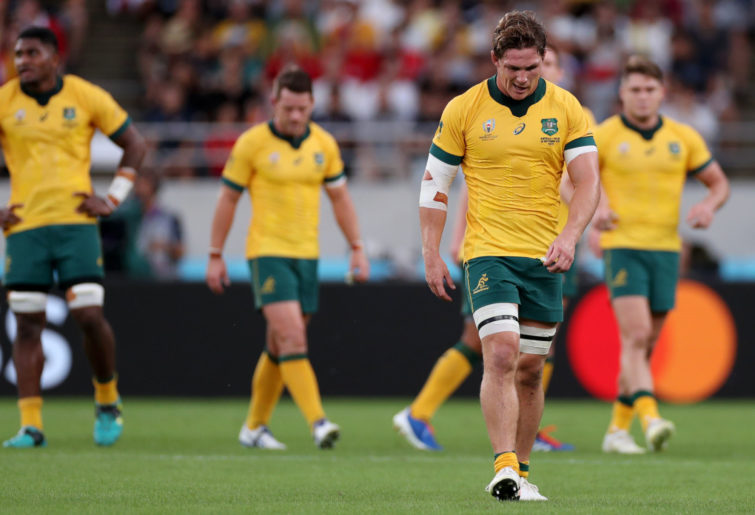 Hooper’s teammate and blindside flanker, Lachlan Swinton, had a stellar performance and one that I’m sure Rennie has noticed. At 23, this is his second year playing at the Super Rugby level.

Within ten minutes of returning from the halftime break and in a defining moment of the game, which offered the Waratahs further opportunity to come away with the win, he linked up with Jack Maddocks through an on-target inside ball in an inspiring example of set-piece play.

Swinton also tackled superbly and it seems that both he and the Waratahs’ tighthead, Harry Johnson-Holmes, have been hitting the tackle bags while in isolation, because they perfectly executed some terrific tackle technique as a duo, which quite often stifled the Reds’ attack and crushed their momentum.

This is not surprising because in the six pre-COVID games of the 2020 Super Rugby season, Swinton achieved a 93 per cent tackle completion of his 70 attempts. After his showing in the Australian domestic competition, there is no doubt that Swinton has etched his name in Rennie’s list of players to watch, although whether he would play alongside Hooper is uncertain.

Throughout the game, Swinton’s opposite number and Reds captain, Liam Wright, displayed his ability to expertly lead his team to a close-fought victory while sporting a magnificently grown isolation beard. This is even more admirable considering the recent issues concerning certain players within the squad terminating their contracts with the Reds for whatever reason.

Playing out of position so that the young gun Fraser McReight could be unleashed on the Reds’ opponents, he never looked uncomfortable on the field. He showed his brilliant game awareness by almost stealing a try from under the Waratahs’ noses until he was deemed to be slightly offside by the referees.

His fellow flanker, Fraser McReight, also won an immensely crucial ruck in the dying minutes of the game, which guaranteed the Reds’ victory. At 21, McReight’s ability to make an impact in the crucial stages of the game is certainly a trait that Rennie would like to foster. Based on the performance of this first game back after COVID-19 mandated isolation, the Reds’ flankers have proven themselves more than capable of filling the boots of Michael Hooper if need be.

Rennie failing to guarantee any Wallabies spots ensures that depth is created and his strategic opening of Michael Hooper’s previously untouchable position in the team aims to foster the progression of the future Australian flankers.

Guessing who can and can’t play representative rugby can be a tedious endeavour, however, what is certain is that hotly contested, exciting competition for Wallabies caps will ensue throughout the entirety of the Australian domestic competition.