Germany’s sevens team has been aiming for core status on the HSBC World Series for years, coming agonisingly close to promotion on several occasions.

Last week’s decision by World Rugby to abort the international sevens season, suspend relegation, yet promote Japan to core status denies the team a fair shake in multiple ways. For the growing sport in Germany, it could prove to be a devastating blow and a missed opportunity.

A mere three months ago in March, World Rugby was touting the 2019 Rugby World Cup viewing figures. That included record broadcasting numbers, a 26 per cent increase of the global TV audience and, to the surprise of many, a 55 per cent surge in the German-speaking markets.

Despite early-morning kick-offs and the German national team failing to qualify for the World Cup at the last hurdle against Canada, Europe’s most populous country tuned in in droves, and thus delivered strong results for a game that’s not yet widely popular across the entire country.

There were almost 11 million cumulative viewers over the course of the tournament in Germany alone, making it the seventh biggest TV market for rugby’s global showpiece, ahead of such mainstays of the game like Italy and Ireland. No wonder the strong figures from Germany were one of the main talking points in the World Rugby press release about the media data back in March.

Last week, though, World Rugby might have done more damage to the prospects of the oval-shaped ball game in Germany, than the successful World Cup in Japan had done to boost them. The world’s rugby governing body announced that the remainder of the Sevens World Series season has been cancelled, even though four tournaments are yet to be staged, due to the ongoing coronavirus pandemic. New Zealand were declared the winners and no national team will be relegated from the circuit. 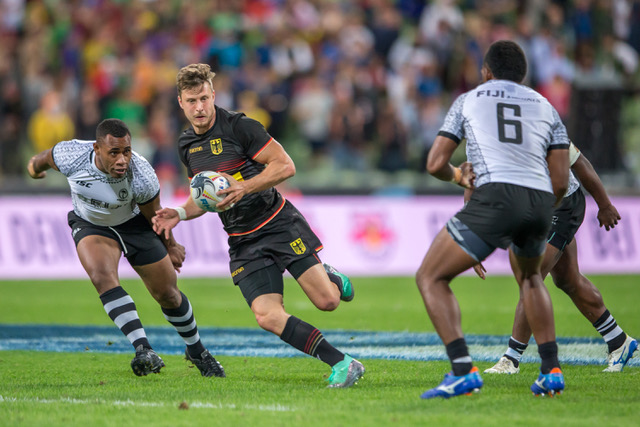 To most rugby fans around the globe, this was minor news on a day that also saw former Springbok captain Mahlatse ‘Chiliboy’ Ralepelle test positive for a controlled substance and the possibility of Japan and Fiji joining the Six Nations countries for a tournament towards the end of the year. Yet for German rugby fans and its national sevens team, it was a devastating blow.

Not only did World Rugby declare New Zealand the winners, they also announced no team would be relegated. Wales had been consistently the worst core team on the circuit this season since the very first event in Dubai in December 2019, only amassing a meagre 13 points in six tournaments and trailing 14th-placed Spain by 20 points. This decision saved the team’s status as a core team – a luxury that a smaller union might not have been afforded by the game’s administrators.

Furthermore, World Rugby declared Japan the winner of the Challenger Series, which in turn earns Japan’s sevens team the right of promotion to the World Series. Suspending relegation but still promoting a team appears odd enough, given the table situation after more than half of the events had been played.

It will result in no 16th guest team competing in any of the ten events of the upcoming season. However the way World Rugby picked the winner of the Challenger Series seems even more egregious from a German point of view.

Despite not being a core team and without any explanation by World Rugby, the Japanese team had taken part in the first four tournaments of the 2019-20 series. In previous seasons the best continental team without core status was automatically awarded the invitational spot.

For teams such as Zimbabwe, Papua New Guinea and especially Ireland this was a chance to compete against the world’s best and get a taste of the biggest stage in sevens. For the Irish team it ended up paving the way to promotion last year.

Germany as winners of the Rugby Europe Sevens Championship in 2019 would normally have been awarded the invitational spot for the Paris and London legs, as it was the case with Ireland in the two previous years. However this now won’t happen and the German team will miss out on competing at Rugby HQ in Twickenham, a lifelong dream for many of its players.

Ultimately not gaining promotion once more is by far the more devastating blow for this team. Germany had recently competed in two finals of the Hong Kong qualifier tournament that up until 2019 determined the promotion onto the World Series. In 2017 Germany lead Spain at halftime, only to be defeated by the Iberians thanks to a miracle ball from Pol Pla in a heartbreaking 14-7 loss.

A year later, the team led Japan in that year’s final with less than a minute to go. With the ball in hand in the opponent’s 22, a win seemed certain, yet Germany fell agonisingly short once more, when the team needlessly kicked the ball away and a couple of refereeing decisions went against their way, which lead to Japan’s Siosifa Lisala scoring with the clock more than a minute in the red. Japan gained promotion, only to field a very inexperienced and under-strength team throughout the entire HSBC World Sevens Series season and being relegated as the worst core team.

This season, with the experienced Damian McGrath at the helm, Germany was determined to finally make the leap and become one of the world’s 15 best sevens teams. Even the fact that World Rugby changed the qualifying mechanism at the last minute in December 2019 and unveiled a new Challenger Series less than three months before it was meant to start wasn’t going to stop them.

Two tournaments in South America, one in Chile and one in Uruguay, were supposed to act as a pre-qualifier, determining which eight teams would ultimately compete for that one coveted promotion spot during the world’s most famous sevens tournament at the Hong Kong Stadium. The goal was still winning in Hong Kong to gain core status, or so everyone thought.

The German team boarded the plane to South America in the knowledge that an eighth place finish was enough to make the third and final tournament. Hence they left a couple of key players at home, in order to keep them fit for Hong Kong two months later. Nevertheless the team won the first leg in Chile, beating Japan in the semis and Hong Kong in the final. 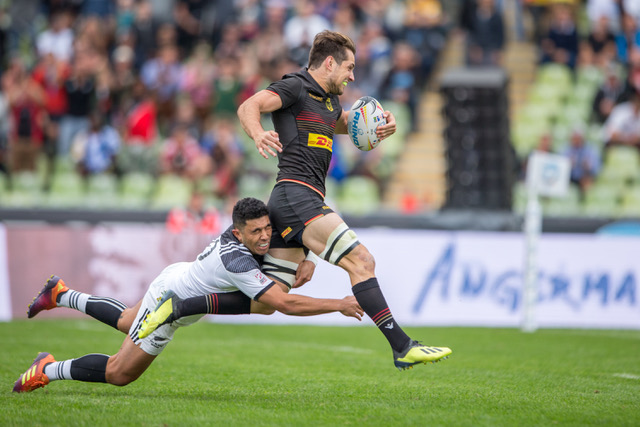 The second tournament did not go as planned for the Germans, losing out in the quarters against Chile by a single score in a game, in which the team did not get the rub of the green. It was ultimately the only loss in South America, but it proved costly.

Japan, after having had a full four World Series events as preparation, the biggest squad of all competing teams and after having been in South America as the first foreign time to give them ample opportunity to prepare, went on to win the final in overtime against hosts Uruguay.

As soon as proceedings were wrapped up, rumours started circulating among the teams, according to which World Rugby would use the results of the first two tournaments to declare Japan the winner. All that in spite of the fact, that the South American legs were only meant to be a pre-qualifier for the Hong Kong decider.

World Rugby assured teams, as German coach McGrath explained on Twitter, that no decision had been made and that the promotion process had not been concluded. But last week’s announcement did just that, leaving German fans and especially the players devastated.

The team’s captain Carlos Soteras-Merz explained the mood in the German camp.

“We are most definitely disappointed,” he said.

“Yes we did not deliver on the pitch in the second Challenger Series, but the fact that there’s no relegation, yet a promoted team for next year, seems like a questionable decision.”

“We are going to have to live with this decision, even though we don’t necessarily think it’s fair for smaller nations,” he said.

“But we also fell short in Uruguay, when we could have made the decision harder for the game’s administrators by winning the second tournament and the overall Challenger Series.”

ProSieben Maxx, the same TV network that had delivered the record audiences for the Rugby World Cup, recently acquired the rights for the HSBC Sevens World Series. Having a German team compete against the very best teams on a regular basis on network television could have been a major boost for the sport in Germany.

The success of the Oktoberfest Sevens invitational tournament in Munich last year, drawing almost 30,000 fans into the city’s Olympic Stadium, could serve as an indicator of the sport’s potential in Germany. 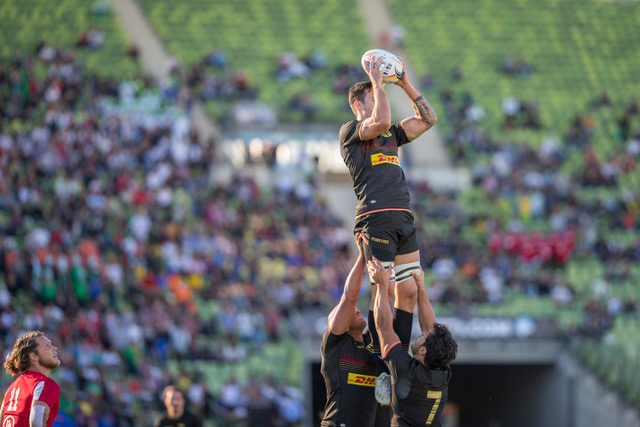 Germany’s Tim Biniak capturing the ball in a lineout in Munich at the Oktoberfest 7s 2019. (Image: Jan Perlich)

The tournament organisers had tendered to become part of the HSBC Sevens World Series two years ago, eventually failing to convince the game’s administrators in Dublin of the viability of their bid, even though the Munich event already drew bigger crowds than several World Series events in 2017.

Now the future of the game in Germany seems somewhat less rosy, despite double-digit participation growth in Germany in recent years. Since World Rugby has not announced how promotion and relegation for next season is going to be organised, the team’s perspective remains murky too. Will there be two teams relegated from the World Series, or will World Rugby not even promote a team after the coming season?

One could reasonably fear that the rules will once again be made up along the way and once more to the detriment of smaller nations. German captain Soteras-Merz hopes for more clarity and urges the game’s administrators to announce early how promotion and relegation will be organised in the coming season.

“We need a perspective, a clear path and transparency early on, so that we can train towards a common goal,” he said.

Depending on how World Rugby handles this issue in the coming months, frustration in Germany will only grow. This episode could end up being another huge missed opportunity on growing the sport in Germany, a stated goal of the game’s organisers.