The Premier League has seen its fair share of dominant striking performances over the years.

This includes 2002-03 Thierry Henry with 24 goals and 20 assists, Jamie Vardy’s record breaking 11 consecutive goals in 2015-16, and Mo Salah’s incredible 2017-18 debut season at Liverpool. However none quite reach the level of Uruguayan superstar Luis Suarez in 2013-14.

Suarez scored 31 goals and assisted 12 more for Liverpool in just 33 games. A feat incredible on its own, but ridiculous when we look closer. The Uruguayan missed the first five games of the season as punishment for biting Chelsea’s Branislav Ivanovic the previous season.

As a result he had a goal contribution (goal or assist) per game of 1.3, the highest for any player in any Premier League season to date. It’s important to remember that Liverpool’s number seven didn’t take a single penalty during the season, the only player to reach 30+ goals doing so.

Captain Steven Gerrard took 11, meaning Suarez could feasibly have been the only player in Premier League history to pass 40 goals had he been on penalties.

The stats don’t lie, Suarez was one of the most dominant players the league had ever seen. This was further indicated by his clean sweep of individual awards that season. 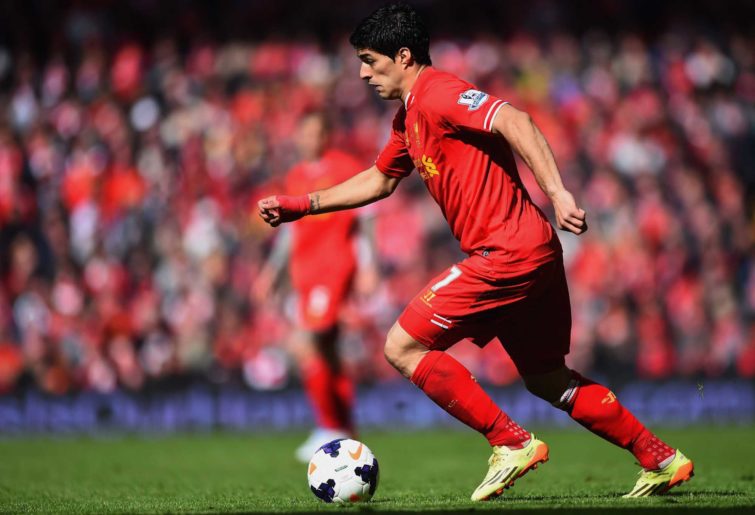 Unlike previous golden boot winners Suarez was in a very average side made up of youngsters like Coutinho and Sterling, and veterans Gerrard and Kolo Toure. Furthermore, Liverpool were by no means solid down back, conceding the second most goals out of any team in the top half of the table, highlighting their dependence on Suarez to win matches for them.

Suarez was the complete striker in 2013-14, scoring all types of goals. 23 from inside the box, eight from outside the box, four volleys, three headers, three free-kicks, Suarez could do it all. The pick of the bunch were two volleys against Norwich, a team renowned for its susceptibility to Suarez’s magic.

Postgame, Liverpool skipper Steven Gerrard had this to say about the Uruguayan’s four goal performance:

‘You have seen a world-class performance, probably one of the best individual performances I’ve seen at Anfield – and I’ve been playing here a long time….I’ve been pushing his corner for a long time that he is up there with the best in the world. I think he’s getting so close to the main two, Ronaldo and Messi. If he keeps going, i think he can catch them. His fourth goal was average and it was a 30-yard free kick, so I think that sums his performance up.’

Unfortunately for Gerrard and Liverpool, Suarez’s performance’s would earn him a move to Barcelona a year later. A dream move that would see him form the formidable strike force with Leo Messi and Neymar.

There’s no debate that Luis Suarez 2013-14 was on a different plane. Winning the golden boot with 31 goals while missing five games was something that had never been done before, so does this make his season the greatest ever? If not who beats him? No one if you ask me.