Cornwall stands 6ft 5in tall and weighs in at over 22 stone and is believed to be the heaviest player in the history of Test cricket.

The 27-year-old has taken 13 wickets in his two Tests to date, including a seven-wicket haul against Afghanistan in November, and is now set to line up against England from Wednesday.

“His size has not been an issue. If you see him at slip and some of the catches he has taken, there is no issue there,” Simmons said ahead of the #raisethebat series opener at The Ageas Bowl.

“He is capable of bowling an enormous amount of overs, he has done that throughout the years so [his size] has not been a hindrance to him.

“His little knee injury has been fixed and now he is as strong as ever. He is a very quiet character but a very serious man.”

West Indies – Wisden Trophy holders after beating England 2-1 in the Caribbean in 2019 – will be facing a home team missing star batsman Joe Root, with Ben Stokes captaining for the first time in his stead.

Simmons, though, does not believe Root’s absence due to the birth of his second child and England having a novice captain will make things easier.

“You have to be careful about how you use an advantage,” said the 57-year-old. “With Root not being there some youngster will want to make a name for himself. Sometimes that is even harder than facing players you know. 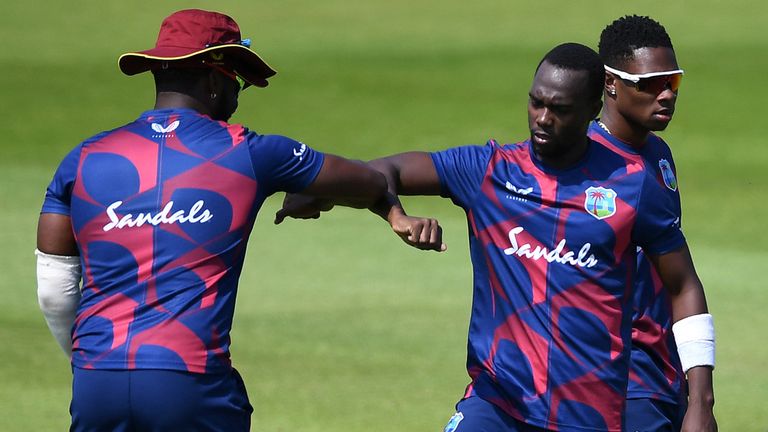 It is a huge blueprint for how cricket can move forward in this situation. We are showing other places how you can start putting things together. There are parts we are going to have to keep even when we get back to what we consider normal life. I really like the extended squad.

“England have had a successful team for some time so it will help Ben that he has the experience behind him, in Jimmy [Anderson] and [Stuart] Broad and people like that if he comes a cropper on the field. It is hard to say that it’s a big advantage for us.”

Simmons says West Indies have yet to decide whether to take the knee at The Ageas Bowl but insists the Black Lives Matter movement is something that continually inspires them.

“We will make a decision on taking the knee on [Monday evening] but we will definitely be doing something. We have already had the [BLM] logo put on the collar of our shirts so that is a start,” added Simmons, who played 26 Tests and 143 ODIs for West Indies between 1987 and 1999.

“It means a hell of a lot to all the players and staff on the tour. It’s not just about now, it’s about life on the whole. We as a group don’t say ‘this is going to motivate us’ as it motivates us all the time.”

Watch West Indies’ #raisethebat Test series against England – named in tribute to key workers who have been on the frontline during the coronavirus outbreak – live on Sky Sports Cricket from 10.30am on Wednesday.