It’s as if Quique Setien suddenly discovered a button on an elaborate switchboard that’s been under his nose the whole time. A simple push and Barcelona are instantly returned to a brand of swashbuckling football that lives up to their reputation.

The Catalans won 4-1 at Villarreal on Sunday night and a new formation, not Lionel Messi, was the biggest talking point.

Deploying a 4-1-2-1-2 formation, Setien seemed to unlock the full potential of his illustrious forward line with Antonie Griezmann and Luis Suarez playing in a front two just ahead of an instrumental Messi in the No10 role.

Here’s an in-depth look at the three main aspects of the system, how it worked, and why it isn’t perfect.

The most eye-catching aspect of the new system was the ease with which the front three of Messi, Suarez and Griezmann operated within it.

At the tip of the midfield diamond, Barcelona’s talisman was in his element. He was central to the team’s play, as his underlying stats would suggest. He finished the game with the most touches, duels, chances created, shots and dribbles.

He made himself available in the transition to lead the attack on the break and was the orchestrator during longer spells of possession.

With Griezmann and Suarez making clever runs ahead of him or with one of them dropping off in support, he had plenty to work with.

The second goal shows off Messi’s effectiveness as a No10 as he brilliantly chests down a clearance from Marc-Andre ter Stegen before evading a couple of yellow shirts and turning as his fellow attackers dart forward. 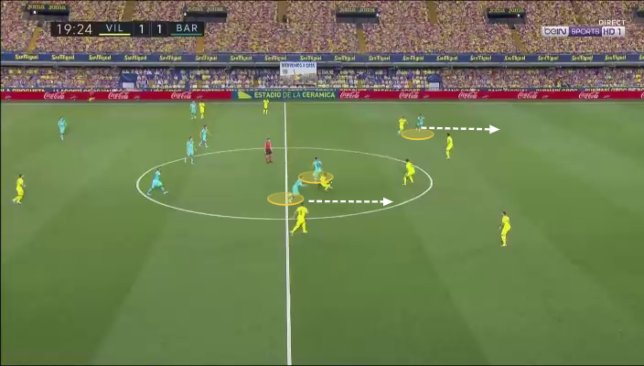 Messi fends off two challenges and passes to Suarez in space who finishes brilliantly. But the striker only has that much room to work with because of Griezmann’s presence attracting the attention of two Villarreal defenders in the back-line, leaving the third defender isolated and unable to cover Suarez’s run on the outside or close down Messi sooner. 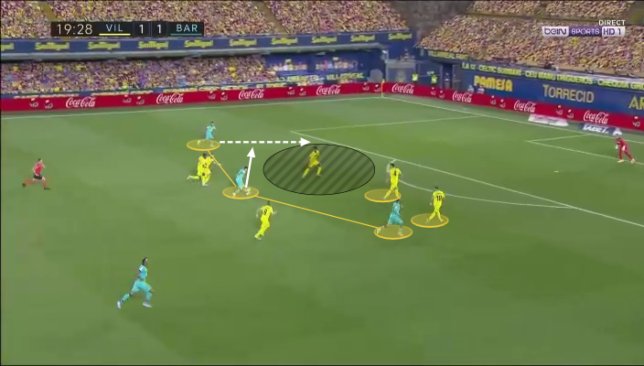 The biggest difference in performance came from the Frenchman who has struggled in a wide role since his arrival from Atletico Madrid. Not only was he able to flourish through the middle but with Suarez to work in tandem with, he could pick his moments to drop deep or drift wide on occasion too.

In the example below, Messi receives the ball around the half-way line and immediately has the runs of Griezmann and Suarez to choose from. 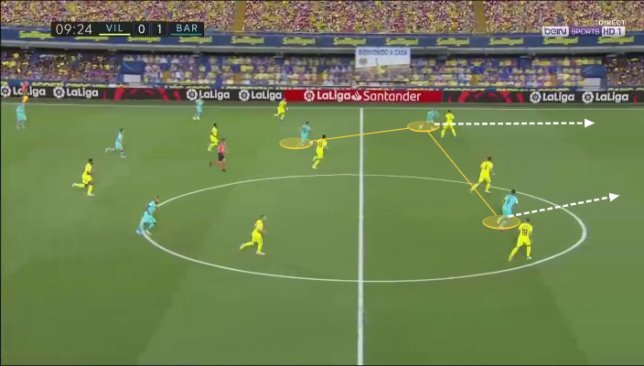 He picks out Griezmann but the trio remain in close proximity as the move advances while Arturo Vidal and Nelson Semedo creep forward unnoticed. 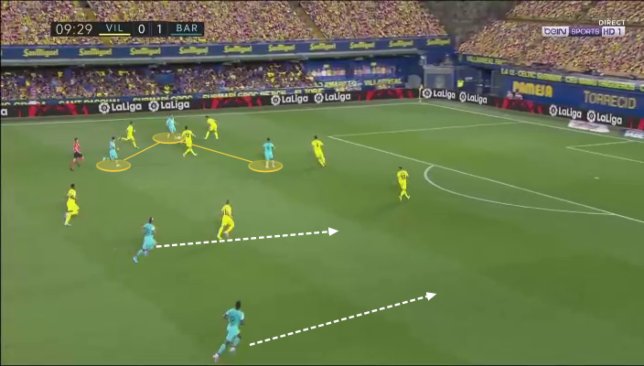 Griezmann finds Suarez who flicks the ball on for Messi. The 33-year-old spots the space on the far side and his through ball creates a great chance for Vidal. 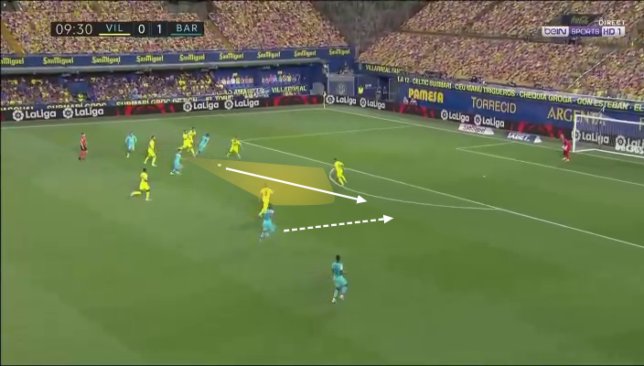 The pace and width Jordi Alba and Nelson Semedo provided on either flank was paramount to the functionality of this system in attack. The duo were responsible for stretching the field of play and creating space through the middle and in the half spaces for the talented front three to flourish.

Griezmann’s goal was a thing of beauty with Suarez and Messi doing well in the build up before the Frenchman executed the creme de la creme of audacious chips to finish.

However, the work of the two full-backs during that phase was absolutely crucial. Notice how high up the pitch they already are when Barca gain possession and Suarez plays the ball wide to Semedo. 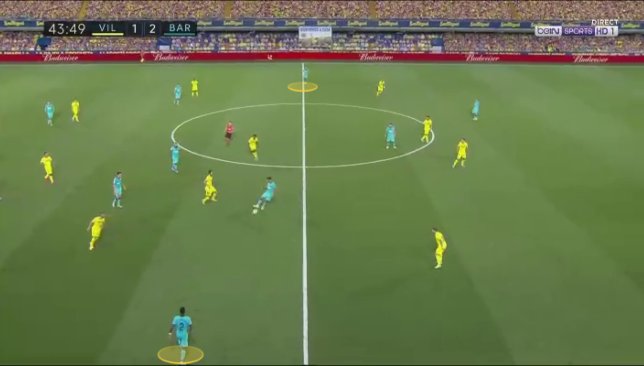 Because of the right-back’s position, he creates a substantial gap in the back line which Suarez can attack once he plays the ball back to him. 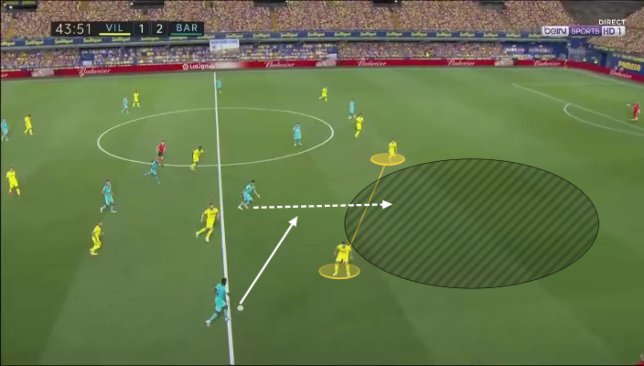 As the Uruguayan drives into the space, Semedo continues to occupy the defender on the outside while Alba bombs forward on the opposite side. 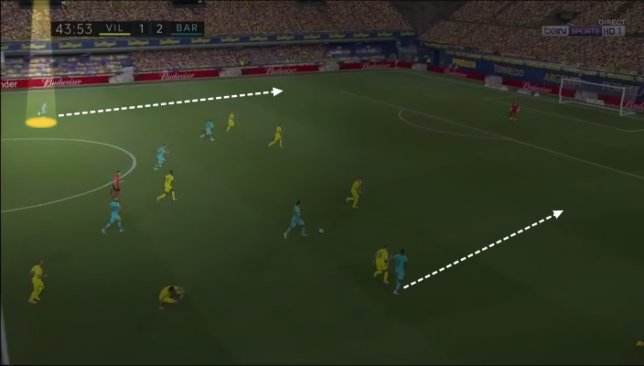 As a result, Barcelona find themselves in a three-on-three scenario once the ball is moved to the left and Griezmann lays it off for Messi while he hangs back. The Argentine drives at the defenders who are also wary of Alba’s position out wide and have no choice but to back up. 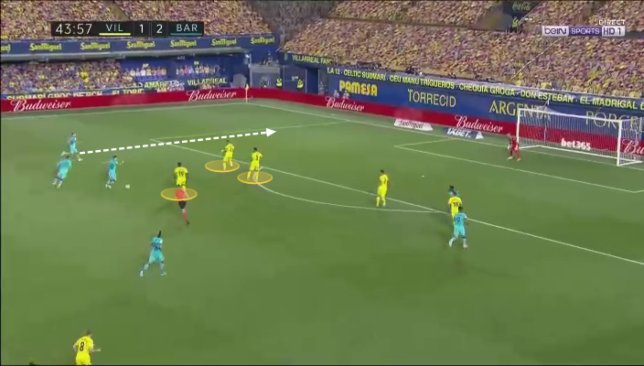 That ultimately creates the space for Griezmann on the edge of the box who is found by Messi’s back-heel. With ample time on his hands, the forward produces a moment of magic to lob the keeper who’s barely off his line. 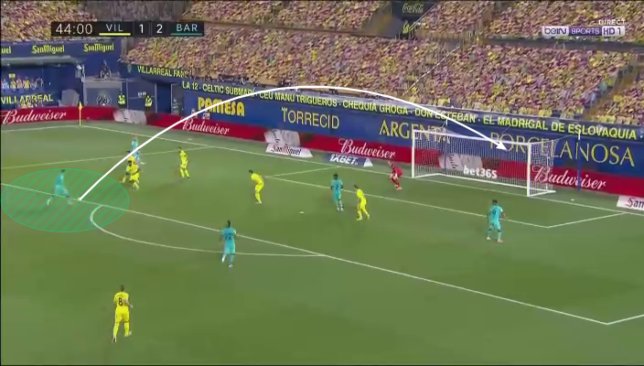 The downside to the diamond midfield is that Barca don’t necessarily have the ideal personnel to pull it off without leaving themselves exposed. Vidal and Sergi Roberto flanked anchorman Sergio Busquets in midfield to provide more mobility in the middle of the park but were easily caught out on occasion.

With the full-backs pushing so far forward, there’s an obvious imbalance to the system. Villarreal’s goal was the perfect example.

When an attack breaks down and Barca lose possession, Semedo is the furthest man forward. 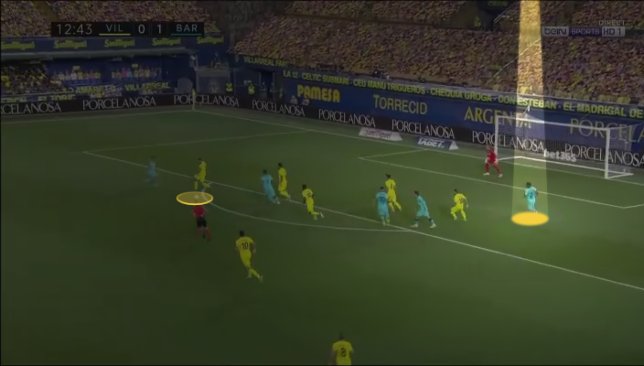 As the ball is moved wide, Alba confronts the man in possession, leaving acres of space in behind him. Clement Lenglet, as a result, shuttles wide to try and cover that space but in doing so opens up a channel for Paco Alcacer to attack. 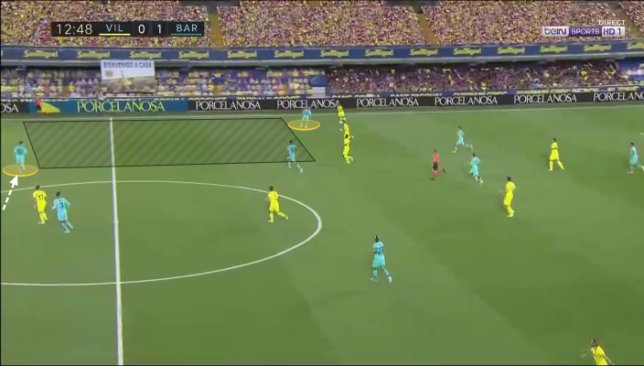 The ball forward plays the former Barcelona striker in behind the defence. Lenglet has his hand raised, appealing for offside but he’s the one who played Alcacer on because he was attracted to the vacant space, allowing the run to materialise on his blindside. 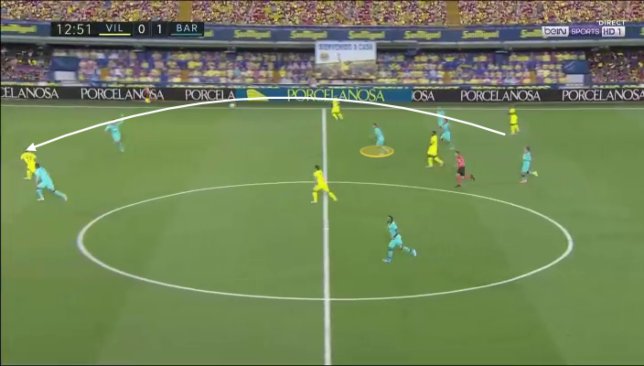 Alcacer goes on to find Santi Cazorla on the far side with Gerard Pique and Lenglet outnumbered and scrambling to defend their lines. The Spaniard’s uncontested shot is saved before Gerard Moreno eventually turns in the rebound. 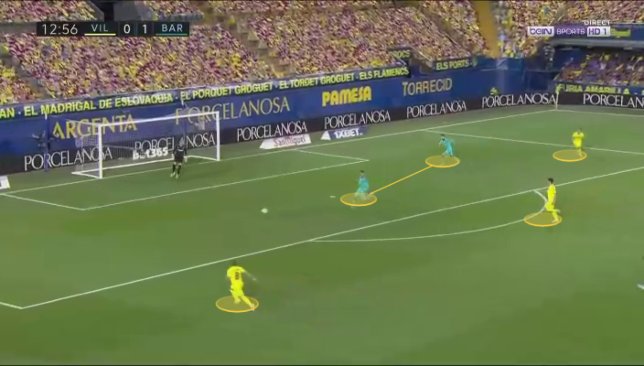 This was just one of several instances that left Barca’s defence exposed. Setien managed to rectify the issue to a certain extent in the second half but that compromised their threat in the final third.

The system definitely brings out the best and many of their best players but finding the right balance will be key to ensuring its success.