The legendary general manager of the Toronto Blue Jays and the Philadelphia Phillies in Major League Baseball, Pat Gillick, once said “Building a baseball team is like building a house. You look for the best architects, the best builders, and then you let them do their jobs.”

Gillick had the longevity to prove his point, he was involved at the executive level of baseball in the US for over 30 years. He saw the importance of building the right structure in selection and development as an art in itself, as both a head of scouting and later a successful GM at four MLB franchises.

Building your sporting house is an art and a science. It implies a strong vision of what the house will look like at the end, and it means employing the right people in the right roles, in both coaching and playing, to get the job done.

It is a process which has been neglected in Australian rugby over the last few years. A couple of weeks ago, I examined how Reece Hodge’s versatility was in danger of turning from a blessing into a curse, simply because he had not been encouraged to find his best position on a rugby field.

But it is not only Reece Hodge who has been misplaced in Australian backlines over the last four years. Jack Maddocks could also make a legitimate claim to selectorial abuse during the same period.

Maddocks is listed on all the websites in his preferred position as a fullback, but his seven appearances in a green and gold jersey 2018 have occurred exclusively on the wing.

Physically and in terms of skill-set, the player Maddocks most closely resembles in recent Australian rugby history is Stephen Larkham. At 6’3½, Maddocks is an inch taller and his physique is probably a little more robust than Larkham’s willowy frame.

Larkham started his professional career at number 15 and then found a permanent home at number 10. Whether Jack Maddocks will ever be a top-class flyhalf remains open to debate, but he certainly deserves to be given a head-start at fullback.

To date, that opportunity has been largely denied him at the Rebels and with the Wallabies. Thankfully, at Rob Penney’s youthful Waratahs it looks likely to materialise at last.

Kurtley Beale’s move in the Covid-19 off-season to France has opened the door, and Penney fully expects Maddocks to step through it. He said:

“Jack [Maddocks] would be to the forefront of your thinking… It’s a big hole [left by Kurtley Beale], we don’t deny that.

“He’s been a massive influence on, not only us, but Australian rugby for a long time and such an influential figure.

“He’s world-class and he’s proved that on the biggest stages – World Cups, Super games at the highest level and Test rugby.

“There’d be no doubt he leaves a big void but it’s like anything.

“When a void’s created, something fills it, we’ve just got to make sure it’s a really positive outcome for us and the growth of some of the potential leaders of the future will get an opportunity and get exposed.”

If the former Melbourne Rebel can take his chance with both hands, it will help lock in the foundation of Dave Rennie’s new Wallaby architecture for years to come.

Jack Maddocks has something that Australian teams of the last four years have always lacked with Israel Folau at the back – a meaningful kicking game which can be used to hurt the opposition.

The Wallabies often struggled with their exit strategy in the Michael Cheika era because of the relative weakness of their kickers at 10 and 15. On Friday evening at Suncorp Stadium, Maddocks gave a timely reminder that might be about to change:

Basic length is there as a beginning. Maddocks can reach the opposition 40-metre line from positions deep within his own 22. But length off the tee has a more subtle ripple effect that moves far beyond the immediate need to find touch and relieve pressure.

When a defender clears from his own end with the boot, he doesn’t want to simply hand over the ensuing lineout throw to the opponent, he wants to build momentum throughout an infield kicking exchange.

The ‘third ball attack’ can be a potent method of creating attacking momentum:

The length of Jack Maddocks’ punt forces the receiver (the Reds’ James O’Connor) all the way back to his own 30m line to field the ball. He has only run the ball back 10 metres before he has to kick it again: 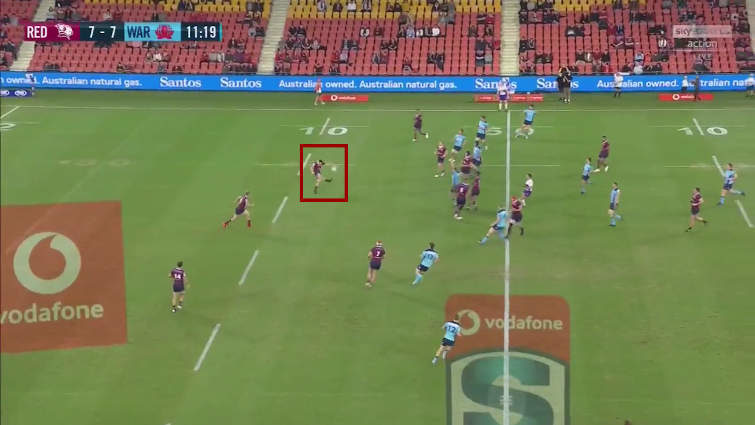 Now look where Maddocks is at the start of the third ball play:

He has advanced another 20 metres upfield with the net gain from the extra pair of kicks. Suddenly, instead of just having to clear the ball, the Waratahs fullback is in a position to do something more creative, breaking the first tackle and setting up the position for a wide attack down the left.

This was no coincidence. The sequence was repeated verbatim right at the beginning of the second period:

Maddocks’ clearance takes play well beyond the Queensland 40m line on the left so that when the return kick comes from Bryce Hegarty, it gives the Tahs’ fullback a much wider array of attacking options well outside his own 22: 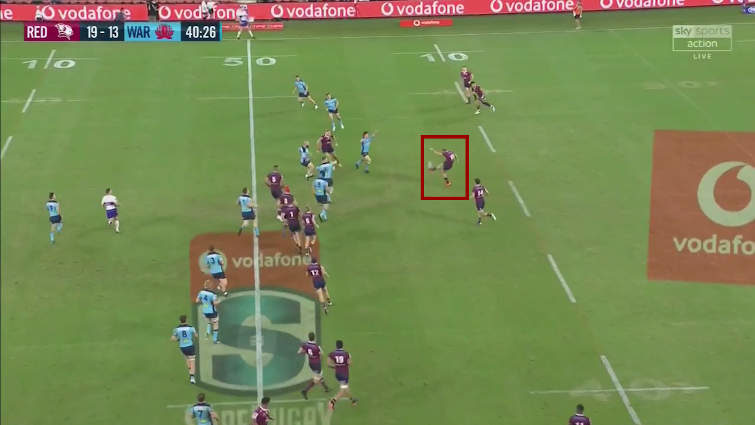 Maddocks is able to offload after the catch and unleash John Ramm for another big line-break down the left-hand side of the field. The two breaks were engineered by the strength of Maddocks’ fullback fundamentals – his ability to kick beyond the opposition backfield and receive the next high ball securely.

The ability to offload on the play after the kick receipt was a theme of his performance:

Just like Reece Hodge, Maddocks seems to enjoy the extra responsibility of being positioned in centre-field rather than out on the edge. Another of the questions raised in the Israel Folau era was his positional awareness as the last line of defence.

Maddocks memorably ran down Reds halfback Tate McDermott after he broke clean down the middle of the paddock late in the first half:

It looks for all the world that McDermott will go all the way, at least until Maddocks appears like an Exocet missile from the left of the New South Wales cover defence. He not only hauls the Reds number 9 down, he then turns the ball over for good measure!

To crown an excellent all-round performance in the problematic number 15 jersey, Maddocks converted the best try of the game midway through the second half:

I strongly suspect Penney dusted off the memory of a lineout move he would have learnt at Munster. His scrumhalf at the club, Conor Murray, used to run this play all the time under Joe Schmidt.

After a midfield set on first phase, the number 9 runs away flat to the short-side, looking to circle around a forward standing at first receiver: 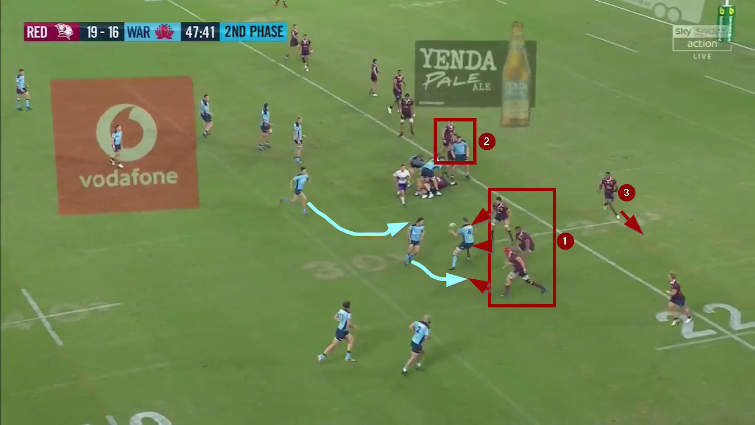 The forward role (which used to be performed by Jamie Heaslip with Ireland) is inherited by Waratahs number 6 Lachie Swinton. The success of the move relies on two key attacking movements:

With Filipo Daugunu also running away from the hole (no.3), Maddocks enjoys a canter to the goalline without a hand being laid upon his person. It was a suitably symbolic climax to a commanding performance.

Summary
The average age of the Waratahs and Reds starting line-ups at Suncorp Stadium on Friday night was a mere 23.4 years old, and seven of the players featured in last season’s junior Wallabies World Championship squad. That bodes well for the future of Australian rugby.

Although the Reds eventually won the game, it is difficult to avoid the impression that it is the men in sky blue who may make strides more rapidly – but only if they can find a front row which can stand up in the scrum.

The acquisition of 2019 junior Wallabies coach Jason Gilmore as their new defensive coordinator was already paying out visible dividends, and the shape of the future behind is being carved out at flyhalf by Will Harrison and fullback by Jack Maddocks. The scaffolding is there.

Like Reece Hodge, Maddocks’ development has suffered by being shuffled out to the wing in flawed selection deals at both regional and national level. He is primarily a fullback and needs to play there consistently. Nobody can be in any doubt of that fact anymore.

Dane Haylett-Petty will be replaced well before the start of the next World Cup in 2023, and the window of opportunity in the affairs of Jack Maddocks has now eased ajar. As Pat Gillick would say, “When you see a window open, you gotta move. But until that window opens, don’t try to open it yourself”.