There is an anniversary looming at Wolves, just before the conclusion of a Premier League season that continues against Sheffield United at Bramall Lane on Wednesday.

Later this month, on July 25, it will be exactly one year since their Europa League campaign began with a 2-0 win over Crusaders in front of a Molineux crowd of 29,708.

There has been a three-month break of sorts along the way, of course, but it serves to illustrate what a journey it has been for Nuno Espirito Santo’s side. Not least because 11 of the players who featured in that game also played against Arsenal at the weekend.

Nuno prefers a small squad but even by his standards this has been a remarkable year. Only 16 of the current group have started a Premier League game for the club this season.

In the four games that Wolves have played since the restart, he has used only 12 different starters with Pedro Neto the only other man to feature prior to the 89th minute. With five Premier League games remaining, they are sixth, still chasing the Champions League spots.

All this in a season in which they have progressed to the last 16 of the Europa League, a Thursday night distraction that is supposed to scupper any ideas about continuity.

Instead, Nuno has made only 44 changes to his starting line-up – fewer than any of Wolves’ rivals for the European places.

“It is a way that we have found and we have bet on it,” Nuno tells Sky Sports. “We realised that by having a small and versatile squad you can face difficulties and overcome them.

“We have a foundation built over time. That is our base, our core. It allows us to make small changes because it is basically the same foundation. What I mean is that it is the same players who have been here for three seasons. That tells you what we are looking for.

“We decided to have a small squad because we believed that having everyone involved – even if they do not start – is the best way to prepare for each game. They all attend the team meetings, the training sessions and the game itself. They are all involved.”

Nuno, a regular non-playing substitute himself during his days as a back-up goalkeeper, knows from experience the dangers of having a dressing room where some feel left out.

“I have had big squads,” he says. “I had big squads at Rio Ave, Valencia and Porto. All managers go through a process of learning and trying to find solutions. I have been through that and I truly believe that the way we have been operating is what is best for us.”

Nuno does not have the demeanour of a man who is too concerned by conflict but his words on the importance of harmony “based on the respect and admiration that we have for each other” tell a different story.

He has worked hard to create a culture at Wolves.

Not only does a tight-knit group make it that bit easier for Nuno to develop a harmonious training ground atmosphere, it also results in more cohesion on the pitch as well as off it.

It feels significant that the four teams that have overachieved their predicted points total by the most this season – Liverpool, Leicester, Sheffield United and Wolves – have also used the fewest players.

“More complicities, small societies,” says Nuno, when asked about the benefits of picking the same side. “That comes from hours on the training ground, hours playing together.”

It is there in Matt Doherty’s movements when Conor Coady picks up possession and looks to hit that diagonal pass to his right. There is the overlapping run when Leander Dendoncker is inside him and the underlapping run into the box when Adama Traore is out wide.

On the other flank, the relationship between Jonny Otto and Diogo Jota has become just as intuitive as they form triangles with the experienced midfielder Joao Moutinho. He, in turn, has his own partnership with compatriot Ruben Neves. The passes are automatic now.

It is extraordinary to think that the 33-year-old Moutinho has, like Coady, already made 50 appearances for Wolves this season. In part, that is because Nuno’s controlled style of play does not place quite the same physical demands on these players. “Having a shape and an organisation sometimes allows you to manage the games,” he acknowledges.

But it also speaks volumes for the injury prevention work at the club’s training ground.

Nuno is understandably cautious about talking up Wolves’ astonishing lack of injuries since he arrived. “The game of football is so unpredictable that you cannot look too far ahead.”

And yet, something must be working.

Nuno believes that it is “not just about the physical aspect of recovery” but the fact that his players are able to begin preparations for the next game almost immediately.

“This is where you can gain time through the week,” he explains. “I don’t know about the other clubs but the best that I can say is that we make the recovery time useful.

“The players do not just come to training to recover, we can still provide information to them during the recovery process. They are already working on the next game even if they are not actually going out on the pitch. There are a lot of resources that we can use.” 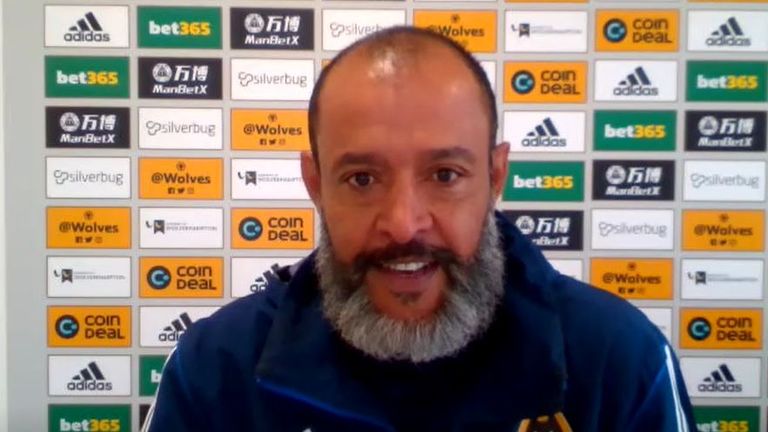 It becomes a routine that becomes a habit and your habits become your character.

What is clear is that Wolves are back in the routine now. One that began almost a year ago and could take them seven points clear of Sheffield United with a win on Wednesday.

That could all but guarantee another season of European football given that Manchester City’s proposed ban might mean eighth is good enough for a return to the Europa League.

Nuno would embrace it all over again.

“Having a tight schedule only makes us want more because the next game is always there in front of us. People can say whatever they want, but players want to play.

“It becomes a routine that becomes a habit and your habits become your character.”

Will Wolves see it through? Such are the expectations at the club these days that the defeat to Arsenal, the team’s first in the Premier League for almost six months, was a real shock.

Some supporters immediately began speculating about the need for changes to the personnel or the formation, even the team’s approach given their record as slow starters.

Most know Nuno well enough not to expect the mantra to change.

“Ups and downs happen,” he says.

“It is about finding the right solutions with the same players.

“We have a young squad with a lot of room to improve. We believe that young players mixed with experienced players means we have a good recipe. This is a building process looking for something that doesn’t exist and that is perfection. But we are chasing it.

“We know that things are not always going to be OK but staying together and working as a unit is what can give us success. We know there will be ups and downs but we have the confidence to believe that going with the same idea again and again can only improve us.”

As Robert Plant, the former Led Zeppelin lead vocalist turned Wolves vice-president, once put it, the song remains the same.