The AFL season has returned and its flexibility has been tested right from the outset, fighting to put on the entertainment needed as a distraction during trying times.

And for the overwhelming sense of negativity towards the game at the moment – for its shorter quarters, for the broadcasters’ volume control of fake crowd noise or for umpiring decisions – the show has gone on since Round 2.

In recent days, external criticism has been leveled towards the AFL, which feels like a personal attack on the entire community.

There is a level of hypocrisy in all of this, made even clearer in these times where the world is suffering and having sport is everything, for some.

Fans will indulge in the negativity towards the nuances of the games because it’s all we know.

Weeks cannot go by without complaining about team selection, a holding-the-ball decision, or the score review system.

At times, it’s difficult to separate the love of the sport with the passion that drives the disgust.

Then there is the external media, giving no value to the importance of the AFL to its stakeholders, whether it be the consumer, the players themselves or those who are paid because the season goes on.

Questioning why the league and its players have been allowed to stay marginally ahead of society to continue its season, not understanding just how important this is to some people.

With Victoria shut down until at least the latter stages of August, perhaps the notion of gaining perspective will become clearer.

The average fan, in an oft Victorian-centric league, will be watching games played exclusively interstate, understanding how lucky we are for the competition to continue at this point in time.

External media critics will lose interest in what is not on their doorstep, with no one left to humour with provocative commentary designed to garner a reaction.

With perspective comes a greater appreciation for the game, and greater focus on its players.

And with a greater focus on the people trying to entertain us, providing a slither of normality in a difficult time, that appreciation, can become inspiration.

Perspective is everything, and Jack Higgins is the poster boy.

Everything is trivial when it comes to the struggles of teams and why they are performing the way they are.

Except within the confines of a combustible and frenetic competition, it’s easy to get swept up in the minutiae.

Why Chayce Jones isn’t getting more midfield time at the Crows is a great question, as is why Melbourne didn’t address its kicking and forward-line issues at the end of 2019.

But now is the time to find perspective and inspiration within the league, and for coaches to be leaders of men and provide that insight.

Higgins didn’t enter the AFL draft knowing what was to come. He averaged 23 disposals, five marks and five tackles in 14 games for the Oakleigh Chargers in the 2017 TAC Cup, kicking 31 goals in the process.

Richmond was beyond delighted to have secured the spritely 18-year-old with their first pick, having slid to the end of the first round, and he made an immediate impact.

It’s not often draftees are selected by the reigning premiers and play 20 matches in their first season.

But Higgins did it.

And he made headlines in doing so. 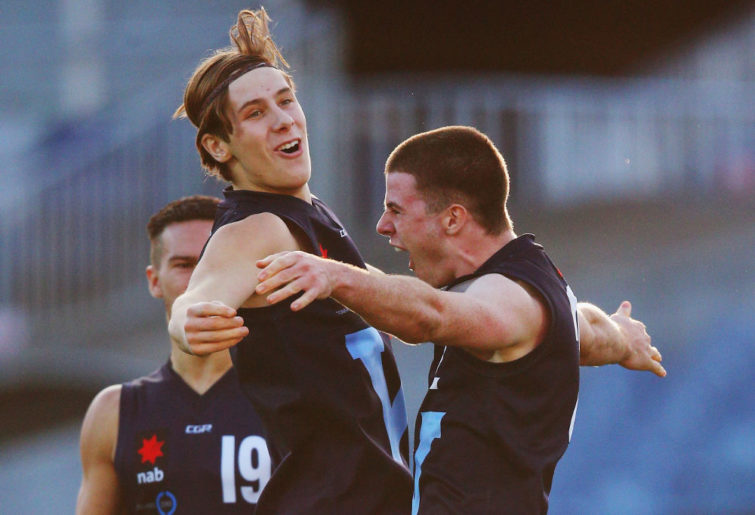 A happy-go-lucky character who, in his first season, was telling jokes in the team huddle and revered by his teammates for his positivity, Higgins had it all and it wasn’t his football defining the esteem in which he was held.

Perspective is everything, and Jack Higgins was perspective.

At 177 centimetres tall, Higgins was playing as a high half-forward with bursts in the midfield, showcasing the skills that made him a Morrish Medalist as a junior.

With high footy IQ, quick hands in the contest and incredible marking ability – and with Champion Data’s full backing – Higgins had a great impact immediately.

Playing decent footy for the first half of 2019 as a regular, no one knew the difficulties that were headed.

His story is well known – Higgins had surgeries to the brain when doctors found a bleed. As with all intrusive surgery, the warnings of enormously life-impacting results were shared.

At 20 years of age, there was a real possibility of his career being over.

Overwhelming support and an incredible level of care directed towards the young Tiger gave an insight into the impact he had on the competition in his first 18 months, and the human aspect of what is, for all intents and purposes, a game made for entertainment.

The shock and coverage of Higgins’ issues subsided and as the season wore on, it was a private battle which he admitted played a mental toll on him.

The Tigers won the premiership and Higgins was recovering from brain surgery.

If any media personality is willing to question the importance of footy to society in general, perhaps they can be directed towards young Jack Higgins.

The pain in which uncertainty can bring us all can often be at least partially cured by indulging in what we love.

Higgins went through a tougher battle than most people his age, and many people will ever have to deal with.

And the relief participating in training brought him, getting into the AFL environment he grew accustomed to and knowing all the support he received, has provided a positive shine on a difficult time for him personally.

Astonishingly, Higgins has played in all five of Richmond’s games so far this season. Going beyond the incredible fact that the 21-year-old earned his spot back for the Tigers immediately is how he has played.

Averaging 16 disposals, seven contested possessions, five marks and two scoring shots a game, Higgins has been one of Richmond’s most consistent contributors.

Watching him play is similar to what you’d expect a young player’s parent feels – an immense sense of pride mixed with wincing any time he is in a contested situation.

Higgins has been through an incredible amount at a young age and has worked to give himself the best opportunity to succeed in a sport he is passionate about.

And that is the important part.

Just like Higgins, most players and fans are incredibly passionate about the game.

If the game goes ahead as it currently is, players can enjoy themselves, fans can be entertained, and many people are in a job.

On the small scale of the competition, teams need to focus on mental health and mindset more than anything else at the current time.

Those aforementioned issues with Adelaide and Melbourne require Matthew Nicks and Simon Goodwin to put things in perspective, just like the rest of society does on the grand scale of things.

Richmond will have its struggles with a youthful team, but it has a leg up on the competition – it has Higgins.

With perspective comes inspiration, and there is no better inspiration for the young Tiger cubs ahead of this time away from home than their teammate who will feature in the top five of the club’s best-and-fairest this season.

Because perspective is everything and, as it turns out, Higgins has always been the AFL’s poster boy for perspective.

Whether it came from the levity he provided the team on the field, or his inspirational story to get back to playing excellent footy with a great work ethic in 2020, Higgins is perspective.

All 18 clubs should use him as all the inspiration they need.

Fans should tune in and watch each game and allow a sense of appreciation for the ability to watch footy be the motivating factor behind their passionate pleas on social media.

And if society needs a motivator, or an inspiration to adhere to guidelines and rules, and prevent complaints of not being able to venture out to a pub, or head to the gym during these times in Victoria, the pocket rocket from Tigerland is a good person to look to.

The entire world is fighting a difficult battle at the moment, and we are doing our best to navigate through troubled times.

The least that can be done is to appreciate those on the frontline, and then those who are trying to provide some positivity and entertainment.

For as long as the AFL season continues, footy fans have what they love and can ride the emotional rollercoaster, if only for the joys of the specificity of the journey.

Let’s take a leaf out of the Jack Higgins book, enjoy the game and let that drive discussions – being grateful for having footy available to us.

Because in times like these, perspective is everything. And in the AFL, Jack Higgins is perspective.