Paul McGregor’s decision to start Ben Hunt at hooker for this week’s clash against the Manly Sea Eagles marks a new high in salary cap history.

With a salary of $1.2 million per season, Ben Hunt is now the highest paid starting hooker in rugby league history. 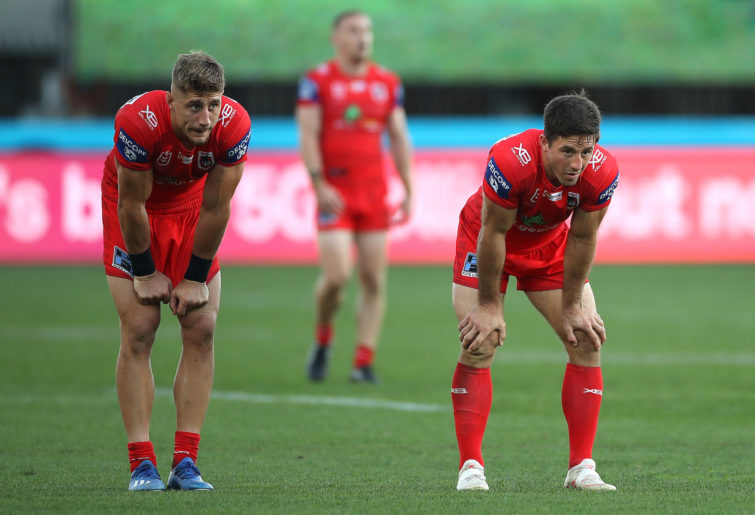 Ben Hunt (right) is now the highest paid hooker in the history of the NRL. (Photo by Mark Kolbe/Getty Images)

The previous high was Damien Cook, with his current four-year, $4.5 million deal with Souths, which gives him $1.125 million per season.

With no surprise, accurate salary figures are hard to obtain from the Melbourne Storm.

But from what I can verify, Cameron Smith is said to be on $1 million a year.

It’s quite possible Smith earned far more than this during Melbourne’s period when they were caught cheating the salary cap but this can’t be verified.

To put this in to context, Api Koroisau is said to be on a three-year, $1.5 million deal at Penrith ($500,000 per season) and he’s absolutely killing it at the foot of the mountains.

The brains trust at the Dragons would have you believe that Hunt is a Queensland Origin rep and this justifies paying a player $1.2 million to play hooker.

But I don’t recall Hunt challenging Cameron Smith for the hooking role in the Queensland Origin team prior to Smith’s retirement.

Based on the current market, Hunt is worth around the $500,000 to $600,000 mark… not that the Dragons needed another option at hooker with Cameron McInnes and Billy Brittain at the club.

For those who continue to defend the signing of Ben Hunt and the decision to play him at dummy half, I ask you to look at the facts and think again.