Devon Petersen enjoyed a strong start to 2020 prior to lockdown, but as the sport returns in the shape of the PDC Summer Series, ‘The African Warrior’ is brimming with confidence as he targets a World Matchplay debut later this month.

Milton Keynes’ Marshall Arena will host five successive Players Championship events from July 8-12 – the first ranking competitions since mid-March, although players will be forced to adhere to stringent guidelines throughout.

All 128 players and staff were tested upon arrival in Milton Keynes and will be forced to comply with social distancing measures, which includes remaining in their ‘bubble’ for the duration of the Summer Series.

Petersen admits his excitement is coupled with an element of trepidation, but South Africa’s World Cup captain told the Darts Show podcast that he is aiming to return in style.

“I’m raring to go,” Petersen told Sky Sports. “It’s been a long time since we’ve played competitive darts face to face, but we’re also presented with the daunting task of having to be socially distanced on the board.

“We’ve got the regulations regarding social distancing, on the board itself there are clearly marked up areas.

“There is a whole host of things you need to change and the rhythm for the quicker players might change as well, because the players need to be out of the zone before you can approach the board.

“I think there’s a load of things to consider, but it’s an opportunity to compete again this year and not a lot of us thought we would come back this year to compete, so I’m really excited to be back.”

It has been uncharted territory for darting professionals over recent months, with the more seasoned Tour Card holders well accustomed to the relentless rigours of the PDC circuit.

Michael Smith is one of several players to have used the hiatus to transform his lifestyle, yet Petersen has been equally productive.

The 34-year-old’s dedication is indisputable and over recent years, he has worked alongside Wayne Mardle to address technical aspects of his game.

Nevertheless, with the typically unrelenting nature of the circuit, this is Petersen’s first real opportunity to develop his game away from the spotlight.

“I know a lot of players have had time to fix parts of their game and if you didn’t actually fix parts of your game during this period, you’re going to be found out,” he added. 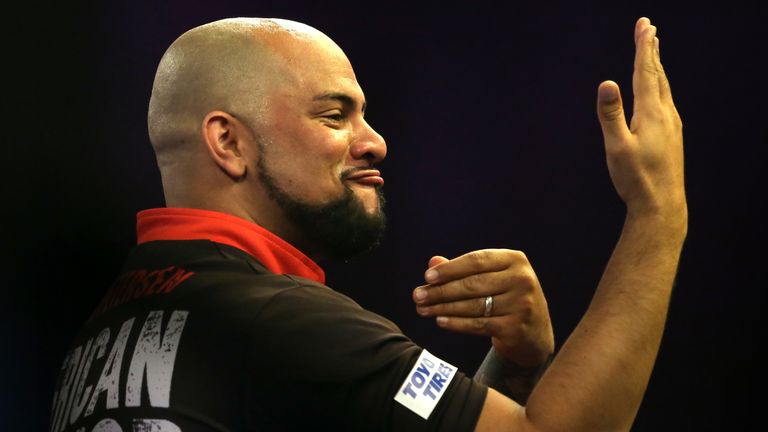 “This time around I had the opportunity to explore my throw without having the pressures of competing at the end of the week.”

Petersen working at his game

“In the last six weeks, every day has been back into grind mode, where you practice for three to four hours a day and I’ve almost refreshed and overhauled my throw which has been a theme that has continued over the last two years.

“This time around I had the opportunity to explore my throw without having the pressures of competing at the end of the week.

“Ultimately it was like a rushed exploration and at the end of the week I am expected to perform, rise up the rankings and qualify for tournaments.

“It has never been a great time, but I took out this last six weeks and pushed it to a level and kind of refined it and found a complete throw that I am so happy with.”

In spite of the adjustments Petersen references, he had made an incredibly impressive start to the new season, with an aggregate average of 98.83 – the fourth highest in the PDC.

Although these performances did not translate into tangible success, he did reach the semi-finals of a Pro Tour event in February and he maintains he has never been so equipped to fulfil his potential.

“I was playing really well before the lockdown and I felt like I was getting to some level that I knew I could get, but I wasn’t reaching those heights,” he continued.

“Different conversations with different people, even Colin Lloyd coming on board – it has put me in the right frame of mind to achieve my goals and it starts with the mental aspect of the game and your mental approach and then the technical side which is the throw itself.

“I think I’m probably the most equipped for the game than I’ve ever been in my nine-year career and I’m looking forward to the future of my darting career now.”

The PDC Summer Series gives some players the opportunity to ease themselves back into the competitive scene ahead of the World Matchplay, but for Petersen, it is essential he hits the ground running.

The South African is £5,500 adrift of World Matchplay qualification via the Pro Tour Order of Merit, but he is determined to grasp the opportunity to secure a debut spot in the PDC’s summer spectacular.

“I think the way the year kicked off – with me qualifying for two European events out of four, it put me into an area where I could compete for that spot. I think I am probably 10 places out and the Summer Series has now given me an opportunity.

“If you catch form at the first event and you continue that form, potentially it could be that you still qualify and reach the levels of making a debut at the Matchplay, which is something that I’m hoping to do still.

“Making it for the Matchplay would be amazing but if you don’t, there are always other things and the massive major at the end of the year is the World Championship, so we’ve always got stuff to work towards.”

However, for the first time since its inception, the Matchplay will not be held at the iconic Winter Gardens, and it will instead go ahead behind closed doors in Milton Keynes from July 18-26.

Blackpool is synonymous with the World Matchplay, but the Cape Town star insists that the unique circumstances surrounding the event could benefit those who thrive in a Pro Tour environment.

“I think where we are at now with the Matchplay, it still holds that prestige as the second biggest tournament in our calendar so it’s exciting times, but it’s a new kind of excitement.

“Mentally a lot of players that play on the floor and play really well on the floor, they are the guys that look at the game itself from a different perspective. It is more business as usual, focused. There’s no other interruptions.

“Some players don’t operate on a crowd basis and they don’t play well on stage, so it will be in their favour but I don’t think anyone can prepare for it. You’re going to go into it thinking it’s a floor event, but knowing it is a major.”

If Petersen can replicate the type of form he was producing prior to lockdown, a Matchplay debut is not beyond the realms of possibility.

Nevertheless, the former World Cup of Darts quarter-finalist confirmed that he will be in attendance in Milton Keynes in some capacity.

“What kind of tournament would it be without Devon Petersen?” he quipped. “I have spoken to the people at Sky and I will definitely be involved whether it is playing or not.

“First prize would be playing which would be amazing but I will definitely be there and I look forward to it.”

Darts returns to Sky Sports in July, with nine days of coverage from the World Matchplay getting underway on Saturday, July 18, and every day until the final on Sunday, July 26.