Before I start this Round 6 preview, I would like to extend thoughts and best wishes to my fellow Melburnians who returned to lockdown yesterday. These are incredibly challenging times and I wish you and your loved ones strength and safety over the next six weeks and beyond.

Luckily for us in lockdown 2.0, we still have the footy.

And while I will be incredibly envious of all those attending games this weekend, I can say I have never been happier to be at home and watching the footy on TV.

I never thought there would be a day that I’d be writing about a Friday night blockbuster between Collingwood and Hawthorn at Giants Stadium, but 2020 keeps delivering more surprises and here is the latest one.

And speaking of surprises, the fact that these two sides are sitting tenth (Collingwood) and ninth (Hawks) isn’t quite what I expected so early on in the season.

However, it makes sense. Each has fallen to the Giants over the previous fortnight and most recently Collingwood is coming off a second consecutive loss, losing last Friday night to Essendon. 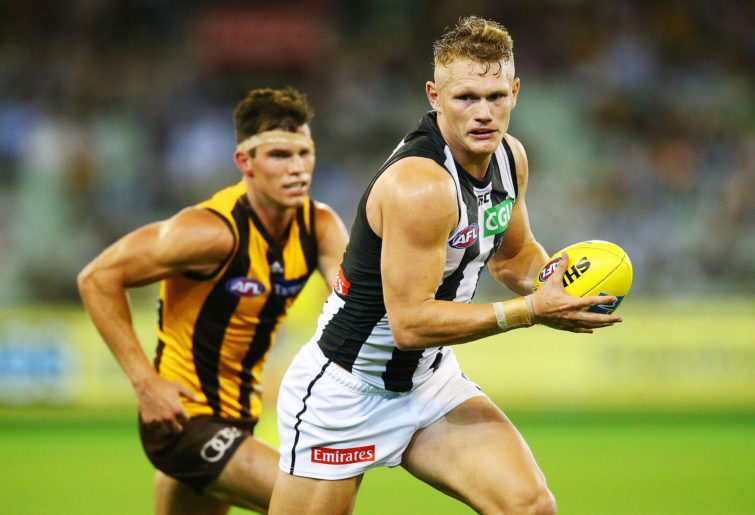 So with both teams coming off losses – and quite bad ones at that – it brings us to the golden question. Who wins tonight?

This week will be challenging for all Victorian clubs, who were rushed into hubs in Sydney and Queensland during the week. It could very well come down to who has been able to adapt to these changes best.

One advantage the Pies will have is that they were already preparing for hub life, as it was confirmed two weeks ago that they would join Geelong in the Western Australia hub. It makes them the first two Victorian sides to play games in Perth since the season restart.

So despite entering the hubs a week earlier than they expected, the Pies and Cats had a jump start on the rest of the Victorian sides in preparing for these changes.

But they’ve also had a bucket load of off-field sagas to worry about.

If Steele Sidebottom’s four-week suspension wasn’t enough to rock the club, then Jordan de Goey being charged with sexual assault over the weekend might’ve done the trick.

Speaking of De Goey, he has been managed by the Pies and will miss tonight’s clash, while young gun Josh Daicos will miss the game through injury.

Exciting Hawks duo Mitch Lewis and Jack Scrimshaw have also been sidelined with injury, while Shaun Burgoyne has been rested.

Harry Jones (Hawks) and Tyler Brown (Pies) have been omitted.

The team changes have presented huge opportunities for four debutants, who will all show just what they’re made of on the Friday night stage. Will Kelly, son of Collingwood 1990 premiership player Craig, will make his AFL debut, as will Fijian-born Atu Bosenavulagi, and 2019 national draft duo Will Day and Josh Morris will debut for Hawthorn.

Given the current state of the country (and particularly Victoria) it’s unclear as to just how much it has impacted the club and players. No doubt it’s had some effect, and perhaps tonight we will learn just how much.

For the Hawks, the key will be making the most of their opportunities when the ball is in hand. They are ranked just 15th in the competition for disposal efficiency, with an average of 69.5 across the season. That’s incredibly uncharacteristic for Alastair Clarkson, who is used to his teams being pretty on point with their ball use and hitting targets.

Compare that to Collingwood, who are averaging 73.5 per cent disposal efficiency, for which they are ranked second in the competition. There’s clearly a bit of work to be done.

It’s an area the Hawks desperately need to work on, with last week’s game against GWS further proving that point.

Hawthorn won the hit-outs (38-22) and clearances (32-26) on Sunday night but failed to capitalise on their dominance at the contest. They were wasteful going inside 50, tracking at just 47 per cent.

There will also be an opportunity for the Hawks to get on top of the Pies if they can bring their best pressure to tonight’s game.

Last Friday night Essendon’s pressure proved too much for Collingwood. The Dons had 15 more tackles for the game (65-50) and had double the tackles inside their forward 50 (20 to Collingwood’s ten).

And what’s working in Hawthorn’s favour is they have some of the best pressure players in the game at their disposal. Hawthorn midfielder James Worpel is currently second in the competition for total tackles (33 from five games) and fourth for average tackles per game (6.6). He could be the one to pressure the ball out of Collingwood’s hands and swing it the Hawks’ way.

And if there is one player he would want to be focusing on, it’s undoubtedly Pies skipper Scott Pendlebury. Pendles is averaging 26 touches per game (fifth in the competition), as well as 4.4 marks, 3.4 clearances, 2.8 tackles and 4.4 insides 50s. We all know what a champion he is, and he keeps showing up again and again.

So with all of that in mind we return to the golden question. Who wins tonight?

I’m going to take Collingwood’s performance last week as one that was out of the ordinary given the off-field drama that’s surrounded them.

I’ll back them tonight, but let’s see if that’s really been the case or if something deeper is going on behind closed doors and below the surface.