“You could probably see the smile on my face when I was celebrating,” Phil Foden tells Sky Sports. “That is what I live for.”

The Manchester City youngster is referring to the first goal in the 5-0 win over Newcastle at the Etihad Stadium on Wednesday. It was his threaded pass that allowed David Silva to cross the ball for the opener that night.

Cue the embrace between City legend and protégé.

Foden is cherishing such experiences right now because the countdown to Silva’s exit is on.

“These are the final moments of his career here so just to be on the same pitch as him right now is special for me. He has been a great player for the club and it is going to be sad to see him go.”

There is a pause before he continues.

“I am trying not to think about it too much and just enjoy my time playing with him.”

Such are the comparisons between the pair that Manchester City’s social media team decided to have fun with it during the Newcastle game by subverting the familiar narrative – crediting the fourth goal of the evening, scored by Silva, to the ‘Spanish Foden’.

“To be honest, I thought it was a bit cheeky of them to say that,” laughs Foden himself. “I really thought David was going to have a go at them for that because it is a big statement.”

Foden is well aware of the truth.

“He has been my idol growing up. I have tried to learn from him as much as I can and take it into my game. It is not like I am trying to copy everything that he does but if I take his strong points – how he moves into spaces and receives the ball – it can only help me as a player.

“I think he has brought my game on massively.”

There is no doubt about the improvement.

Foden’s vast potential has been an open secret since long before his two goals helped England win the U17 World Cup back in 2017. The feeling ever since has been that all he needed was an opportunity.

And yet, even those who have followed him closely are seeing new things now. The rasping shot from outside the box that started the scoring against Burnley. The turn that did for Andrew Robertson before firing confidently past Alisson with his right foot against Liverpool.

Against Newcastle, there were echoes of Silva in those first two goals as he twice broke the lines, playing the pass before the pass. “Sometimes that can go unnoticed,” says Foden.

“The second assist, you know?”

But while there are aspects borrowed from Silva’s game, the young man also known as the Stockport Iniesta has qualities that one would not immediately associate with either of these Spanish magicians.

Consider, for example, the fact that he has now scored seven goals for a second consecutive season. Iniesta did that in back-to-back seasons only once in his entire career.

Indeed, Foden is averaging a goal involvement – a goal or an assist – every 79 minutes in all competitions since completing the scoring against Dinamo Zagreb in December.

Remarkably, that’s a better record than even Kevin De Bruyne in that time.

“I am feeling really confident in front of goal,” says Foden. “Every chance I get I feel like I am going to score. I just enjoy scoring goals and that is what I always want to do in training.

“I was in okay form before we broke up, if I am honest, but I have come back flying.

“Through quarantine I tried to work on some things like one-on-ones and come back stronger. I think I have had good start to the restart and I just want to keep the form going.

“Everyone is getting game time so I am really enjoying it at the moment.”

Foden’s chances have been coming further up the field than some had anticipated, with Pep Guardiola utilising him as part of the front three rather than in midfield.

“He has told me that he likes me in and around the box,” Foden explains.

His man-of-the-match performance in the Carabao Cup final came from the right wing. Against Burnley and Newcastle, he started from the left flank instead.

The 4-0 victory over Liverpool was even more intriguing.

“I played in three different positions in that game,” recalls Foden.

“I even went up front in the end. I enjoy playing anywhere.”

Not only will it help him get more game time but it is all part of his education.

“It is good if you can play in as many positions as possible,” he adds. “I can play in midfield as well as out wide. I want to play in these different positions. I want to be flexible.”

Being exposed to different roles in the team is accelerating Foden’s development and there are two aspects, in particular, that the player himself believes have taken him up a level.

“The defensive side of the game, pressing from the front and things,” he says. “I think I have come on a lot more in the last year with that.”

Secondly, there is his physicality.

At 5ft 7ins, Foden is never going to be powerhouse, but he has worked on his slight frame and now looks to have the strength and speed to shrug off opponents and go away from them.

“I have become more physical up top and that is definitely helping my game,” he says.

“You obviously don’t have to be physical to be a footballer but it is good when you have that little bit of physicality and you can use it well.

“I don’t want to be too big but I just want to be big enough to give me that yard of space. It is something that I have been working on and it has come on a lot. It can still get better.”

That desire to improve sums up his mentality.

“I am still very young and have a lot of things to learn,” he adds.

But if that sounds a little bit too much like a well-rehearsed line, it does not take too much digging to reveal his pride in the fact that he has earned his place in the City side.

Patience has been justified. His commitment vindicated.

“I have worked very hard for the starts and they do not come easy with the manager,” Foden admits. “He rewards you for training hard and working hard. If everyone sees me starting I know it is because I have earned that.

Foden was not immune to the chatter around him.

The urge to compare and contrast his progress with that of the club’s lost boy Jadon Sancho ensured that every match that he missed brought further scrutiny.

How did he maintain his focus?

“Just having the patience. Wanting to be a massive player for this club. The determination I have inside me to train my best. Behind closed doors, that is what I do every day.” 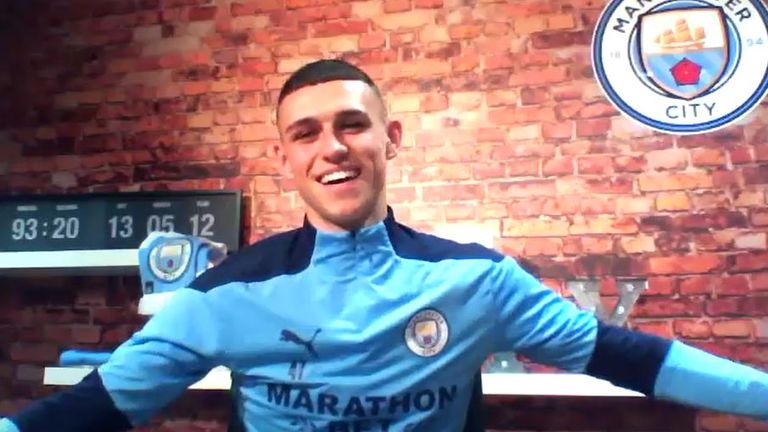 It is really chilled to go fishing. It relaxes your legs and your mind

It is the sort of down-to-earth approach that guarantees his status as a fan favourite. Even his choice of hobby has an everyman quality to it.

“It is really chilled to go fishing,” he says. “It relaxes your legs and your mind.”

Pond fishing is his preference. “Lakes and things.”

He welcomed the relaxation of the lockdown rules.

“They recently told us that we could go back fishing so I have been for a couple of hours in my spare time. I really enjoy doing it.”

Foden needs his down time because the excitement is still to come.

While City are sure to finish second in the Premier League, the true outcome of the season remains in the balance with cup competitions domestic and European still to be to decided.

“The manager has let us know that this could still be one of the biggest years that we could have if we win the Champions League and the FA Cup as well. So there is a lot to play for.

“We are all pushing each other. It has been difficult without the fans but the lads know where we want to be and what we want to win – and that’s the biggest trophies.

“The Champions League is the big one that we have not won yet so we are going to push for it as much as possible.”

The perfect send off for David Silva? Now that really would be a celebration.

Three of a Kind for Liverpool?

Do not miss your chance to land the £250,000 jackpot for a sixth time this season on Saturday. Play for free, entries by 3pm.