After signing an incentive-laden one-year deal worth $555,000 guaranteed with potential maximum earnings of $7.5 million, Newton joins a Patriots quarterback room absent of Tom Brady’s presence for the first time in the 21st century.

In typical Patriots fashion, the deal is a low-risk, high-reward investment for one of the most thrilling quarterback talents to enter the league in the last 20 years.

But what does this signing mean for the post-Brady Patriots both for season 2020 and for beyond?

The Patriots are embarking on their post-Brady era (Kevin C. Cox/Getty Images)

First of all, it’s going to be quite a culture shock not only due to the defection of the quarterback who led this franchise for 20 years but also for the markedly obvious differences between Newton and Brady as players.

Brady, brilliant though he may be, has always been a one-dimensional quarterback.

Working with long-time offensive coordinator and friend Josh McDaniels, Brady and the Patriots offence was built around the RPO (run pass option), with the intention of cementing the running game to allow Brady time to diagnose and take advantage of mismatches downfield with his arm.

Since 2005 – excluding the 2008 season, in which Brady tore his anterior cruciate ligament in the Week 1 – the Patriots have finished on average fifth-best in passing offence each season with a 13th-ranked rushing attack.

In that time Brady contributed to the rushing total with 793 yards, eclipsing 100 yards rushing in a season only twice.

To be fair, Brady has won six Super Bowls during his time in the NFL in which he has spent approximately five seconds outside the pocket. It certainly hasn’t been an issue for anybody at 1 Patriot Place.

But therein lies not just the culture shock mentioned earlier but also the ability to completely flip the playbook, with Newton as the potential starter under centre.

However, all the passing statistics in the world don’t reveal what makes Newton special when he is in full flight.

With Newton under centre in Carolina, the Panthers also relied heavily on the RPO to setup favourable one-one-one match-ups across the field. And if Cam didn’t like what he saw, he would instead run past and over hapless defenders. 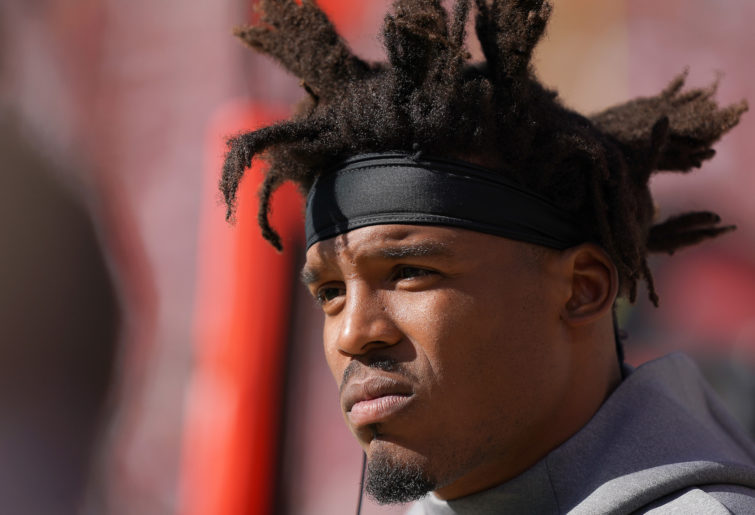 After all, Newton’s 4806 career rushing yards are the third most by a quarterback in NFL history behind Michael Vick (6109) and Randall Cunningham (4928), and his 58 rushing touchdowns are the most ever at the position.

It is, however, fair to wonder if we’ll see Newton at his breathtaking best again.

Injuries, including persistent shoulder and foot issues, cheated Carolina of Cam Newton in the prime of his career and were ultimately the reason Newton was cast away from the only NFL franchise he has ever known.

Newton arrives in Foxborough to play behind the ninth-best offensive line from 2019, according to Football Outsiders, a line that will look to improve on even that respectable rating with the return of star centre David Andrews from blood clotting issues and a healthier season from left tackle Isaiah Wynn.

In Carolina the Panthers offensive line cracked the top ten only once, finishing fifth in 2011, Newton’s rookie season.

Newton would be the unquestioned starter in any normal off-season. But in a year that has been anything but normal, and at a point in the off-season where players would usually be out on the practice field in training camp as opposed to communicating via tolerance testing Zoom meetings, Brady’s successor in 2020 is still anyone’s guess.

But casting the mind back to what Bill Belichick and Josh McDaniels have done with other passers in Brady’s absence – namely Jimmy Garoppolo, Jacoby Brissett and Matt Cassel – is enough to send a shiver down the spine of all those in Buffalo, New York and Miami who thought the division might be up for grabs for the first time in a generation.