In the previous post, I discussed how Rugby Australia can shrink their operating costs.

This post will look at the other side of the coin — how RA can protect their existing revenue streams and grow new ones. Looking at RA’s annual reports, there are three primary revenue lines: broadcast rights (51 per cent), match day (17 per cent) and sponsorship (23 per cent) with a couple of other bits and bobs thrown in so that’s how I will tackle it.

In summary, less is more.

Broadcast rights
You would think that cutting Super Rugby makes the broadcast package much less attractive but I’m not sure this is actually the case due to two trends, which are shaping the TV landscape.

Like many other industries, the TV landscape increasingly resembles a barbell. Content has value if either it’s cheap to make and there’s lots of it (e.g. game shows and reality formats like Border Security) or it draws a really big audience (e.g. the Super Bowl). Anything in the middle is increasingly uneconomical.

Niche content that appeals to relatively few people but inspires a passionate response (like anime or horror movies) is increasingly valuable as it’s easier than ever to get people to pay for stuff they love.

Both of these trends suits Australian rugby pretty well. Super Rugby is the content in the middle getting squeezed but that’s fine, we’re cutting it anyway. There is a heap of club rugby, which can be secured relatively cheaply (especially if you package it up with club competitions from around the world) and fill out content hours on a subscription service. And there is the potential to play a handful of games a year (e.g. Bledisloe and interstate) that draw big ratings that appeal to advertisers. It’s really just a matter of getting the packaging, messaging and promotion right.

Rugby fans also over-index on both passion and disposable income so the trend towards subscription-funded niche content works in rugby’s favour as well. The only way that losing Super Rugby really hurts you is if there are a heap of subscribers out there (including all the expats) who value Super Rugby way more than they value the next level down and decide to cancel their subscriptions. Consider me sceptical.

Don’t get me wrong, the pain being felt by all the broadcasters means that the next rights package will be worth significantly less than the last one but I don’t think losing Super Rugby will be the reason.

At present, there are roughly 40 professional rugby events in Australia every year — eight home games for each of the four Super Rugby franchises, six or seven Wallabies Tests and the Sydney Sevens. Given the significant fixed costs in opening the gates of a footy stadium and the low average crowd, few of these 40 games would make much of a profit. On the other end of the scale, each additional fan that comes through the gate costs you basically nothing so a Bledisloe game with expensive tickets at a packed Perth Stadium does very well.

The model I’m proposing leans heavily into this logic. Rather than 40 major events, I’d have 23 — the Sydney Sevens, Anzac Day, 15 interstate games, and six home Wallabies games. The hope would be that the significant decrease in supply means higher average crowds, so while revenue will likely decrease, profitability should increase. 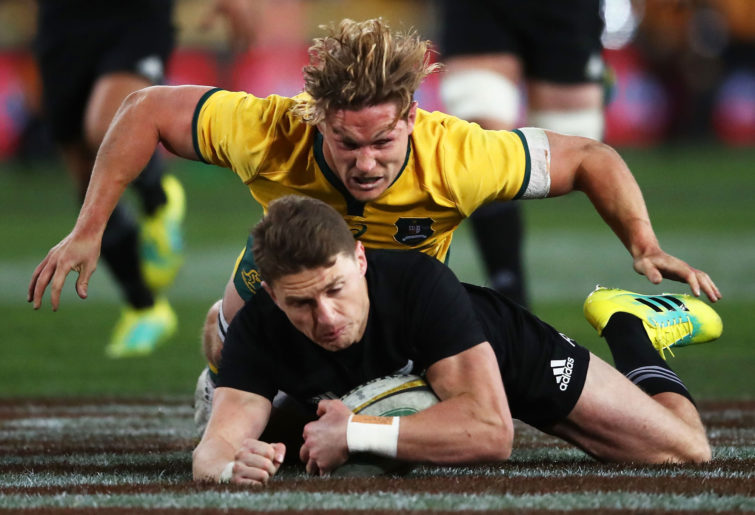 An important part of getting this right is making sure the games are played in stadiums that fit the crowd. Nothing kills the atmosphere of a live sports event like a three-quarters empty stadium so if or when the new Sydney Football Stadium opens, it’s probably time to say goodbye to Homebush forever. It’s a long way from the core supporter base, it’s not a great viewing experience and it’s never full so the atmosphere is usually lacking — not exactly factors that get people rushing back.

Sponsorship
Again, cutting Super Rugby significantly reduces your sponsorship assets so some thought needs to be given as to how you fill the gap. The answer is bundling. Rather than every individual rugby club and every individual rugby competition in the country having their own sponsorship deals, which are sold by volunteers and bought by local businesses, why isn’t the whole lot bundled up and sold together as a whole-of-game package?

A national consumer brand like Woolworths would get enormous value out of sponsoring every amateur and junior footy club in the country (and linking with their local store) as well as sponsoring the Wallabies. It would allow them to combine both local and national messaging, give them heaps more content to work with and a much stronger overall message. I’m not sure why this has never happened before?

Other: Memberships
One thing that stands out when you look at RA’s revenue is how little of it comes direct from fans. It’s just ticket sales from fans and everything else is B2B. The split is something like 85-15. This stands out, especially when you consider the general movement in the media landscape towards transacting directly with customers (Disney and Netflix).

The most obvious option for RA to generate money from Australian rugby fans is some sort of membership. The best bet would be to include access to local club competition, merchandise, preferential access to tickets to marquee games and exclusive media content of some description. Around the world, sports memberships are becoming less about tickets and more about belonging and identity and without an existing revenue stream to cannibalise, rugby has a chance to capitalise on this.

Other: Licensing and merchandise
Little Johnny Howard made the Wallabies tracksuit famous but it, and the concept of the Australian rugby kit, have faded very much from the public consciousness. I would bet that most Australian rugby fans have a jersey from sometime in the ’00s and haven’t bought anything new in the past five years or more. I don’t know exactly what the plan would be here but the fact that the only piece of Wallabies kit I’ve bought or been given in the past two decades is a pair of budgie smugglers clearly points to a missed opportunity.

Summary
Given the dramatic reduction in games that my model assumes, success hinges entirely on making what’s left compelling — trading down on quantity and trading up on quality. This all relies very much on making the on-field proposition more attractive and so that’s the next post tomorrow.