Robert Helenius and Otto Wallin are leading the resurgence of Nordic heavyweights as more contenders are mounting a title charge in the top division.

Finland’s Helenius is within touching distance of a world heavyweight title fight as he awaits news on a WBA final eliminator, while Wallin has proven his worth at the highest level in a battling points defeat to Tyson Fury in September.

But other Nordic prospects are also eager to make their names as Dane Kem Ljungquist and Iceland’s Gunnar Kolbeinn Kristinsson have risen the rankings with unbeaten records.

Who could win a world title?

Helenius could be one fight away from securing a mandatory shot at Anthony Joshua’s WBA title after a career-best stoppage win over Adam Kownacki in February, but he has faltered before, suffering a dramatic knockout defeat to Gerald Washington last summer.

Wallin enhanced his credentials, despite losing his unbeaten record, as Fury could not shift the Swede with the same punches that toppled Deontay Wilder in their WBC title fight in February.

It remains to be seen whether Fury had an off night, or Wallin showed he belongs with the division’s best fighters.

What about the other contenders?

Ljungquist was picked out as a sparring partner for Fury ahead of the Wallin fight and the southpaw took plenty of confidence from his five-week training camp in Las Vegas.

“It was really motivating for me to be around Tyson,” said Ljungquist. “He was very good at complimenting me on my boxing when I had done something good, and his trainer Ben Davison too. They were both really open with me and I learnt a lot.

“I’ve never trained with a man like Tyson before. He’s definitely the best in the world in my opinion.”

Kristinsson made his US debut in January, a second-round knockout win, and has been training alongside Helenius, who speaks highly of him.

“He’s an upcoming fighter,” Helenius told Sky Sports. “We’ve been training together for many years.

“He’s a tall, good boxer. He’s a hard puncher, so it’s good sparring for me. Keeps me on my toes.”

The Nordic contenders are trying to end a lengthy wait for a heavyweight king which stretches back to when Sweden’s Ingemar Johansson sensationally knocked out Floyd Patterson to claim the world title in 1959.

Wallin has voiced his respect for the current crop of rivals, although insists they will only receive true recognition by succeeding at the highest level. 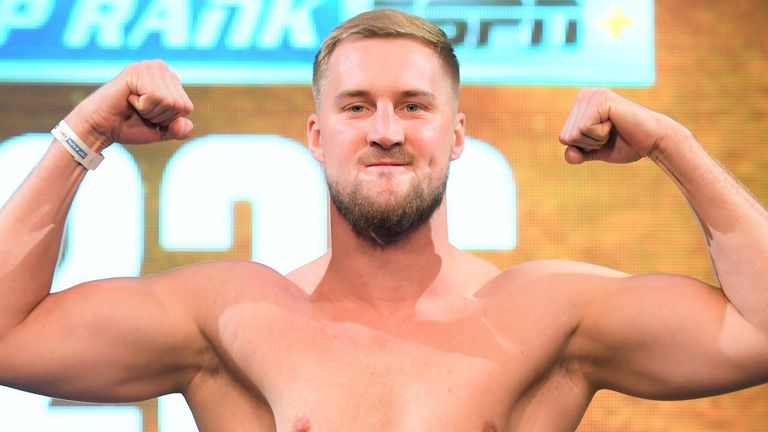 I want to be that guy that goes all the way and so I can inspire the kids in Sweden and Scandinavia and show them that’s it’s possible.

“It’s good we have some heavyweights that are doing well but I wouldn’t call it a golden era until one of us becomes world champion,” Wallin told Sky Sports.

“I want to be that guy that goes all the way and so I can inspire the kids in Sweden and Scandinavia and show them that’s it’s possible.”

Helenius, who defeated Kownacki in front of a large audience in America, said: “It’s looking great. It’s good to have some competition.

“It’s also good for young people as well, because they get interested in boxing. The boxing gyms, especially in Finland after my Kownacki fight, there’s been a good rush.”

Wallin will reportedly return against Travis Kauffman in Connecticut on August 15, having recovered from a minor foot problem that ruled him out of a scheduled battle with Lucas Browne.

Helenius could be ordered to fight against one of the other contenders in the WBA top 10, including the likes of Luis Ortiz or Michael Hunter.

Kristinsson is expected to head back to America for his 12th fight, while Ljungquist will ‘step up for titles’, according to his promoter Nisse Sauerland.