Just six points separate five teams with three games to go – the battle to stay up is well and truly on. Who will survive?

We assess the endangered clubs, the fixtures, and what might seal their fate… 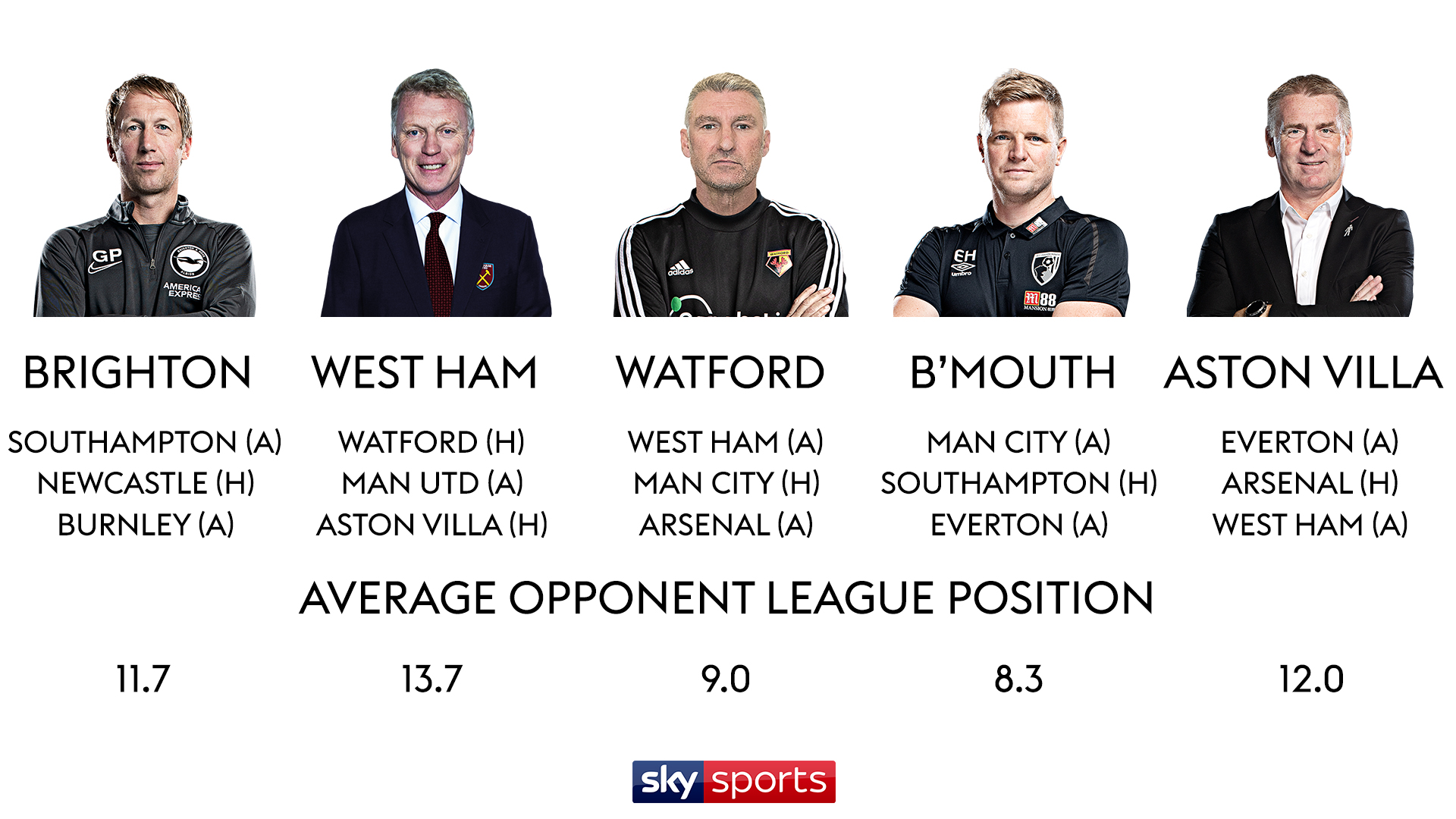 How important might that late turnaround against Arsenal be for Brighton? Neal Maupay’s winner was their first win of 2020 in all competitions and it’s done wonders for the confidence within the club. A gritty 1-0 win at Norwich looked to have secured their status but wins for all the teams below them this weekend may have just increased the tension slightly. However, one point from their remaining three games – all against teams in and around mid-table – should be all but enough to secure their status.

Boss Graham Potter said: “We knew it was going to be a challenge, that’s why I think the Norwich one was such a big one for us in terms of getting the three points.

“And then the quality of the opposition – the three best teams in the country – so of course they are going to test you psychologically and I think it’s just about perspective all the time for us.

“We still need points, from my perspective. We’re still fighting for those.

“We’ve got seven points post-lockdown and we have to try to focus on getting as many as we can from the remaining three.”

David Moyes has always given off an air of confidence regarding West Ham’s ability to avoid the drop this season and his players have responded since the restart. Wins over Chelsea and Norwich have put the Hammers in control of their own destiny; one more win should be enough. However, they have two ‘six-pointers’ to content with in their remaining three games. Saying that, they are unbeaten against the rest of the current bottom six (W4 D4) in matches this season.

Moyes said: “Every one is a big one, isn’t it? Everybody told me today was a big one, everybody said Newcastle was a must-win. Every game is a must-win when you’re a manager. We are in a position where we have our noses in front and we have to make sure we do our job to remain a Premier League team.”

When Nigel Pearson was appointed by Watford in December, the remit was simple. His job was to keep a team up that was then cut adrift at the bottom of the table in the Premier League. He is close to achieving another great escape. A win at West Ham on Friday, a game live on Sky Sports, would go a long way to securing their status.

And with trickier tests against Manchester City and Arsenal to come, that game probably is the time for Watford – and Pearson – to finish the job.

Pearson said: “Anything can happen. We have to keep our focus now, and it is not about thinking the job is done – we have got three more games to make sure we win enough points ourselves.

“What happens elsewhere can help, but if you are reliant on that you are in for a bit of a shock, so our focus has to be there.”

Bournemouth kept their Premier League survival hopes alive after coming from behind to beat Champions League-chasing Leicester 4-1 on Sunday – a result that keeps them on the coattails of the rivals above them. And just turns up the heat on both West Ham and Watford ahead of Friday. Unfortunately for the Cherries, their next fixture takes them to the Etihad Stadium on Wednesday to play a team that have won 20-0 on aggregate across their last five home matches. The challenge for Eddie Howe remains huge.

Bournemouth boss Howe said: “We’re in there [with a chance of surviving]. It’s still going to be difficult but we’re in there fighting and we’ll continue to do that right until the end. I’ve always believed the players are good enough to get the results we need, probably for the first time tonight in a long time, we’ve had a bit of luck to go with a lot of work that went into the match. Hopefully that can give us the lift we need for the remaining three games.”

Two wins might be enough, but three wins are probably the reality for Aston Villa now in order to save their season. At least it’s a task that is by no means impossible with fixtures against out-of-form Everton and inconsistent Arsenal on the horizon. Both opponents have little to play for. Villa impressed in the second half of their vital win over Crystal Palace. Now is the time to maintain that form.

Villa boss Dean Smith said: “The Palace win was the first leg of a semi-final, and we’ve managed to win that, and we’ve got a second leg at Everton. It gives everybody a big lift. Our performance since lockdown has been really good, that’s our second clean sheet, defensively we’ve been better, and now we’ve scored some goals, which we needed to do, and created some chances.”

What are the odds?

Bournemouth and Aston Villa have it all to do according to Sky Bet, both remain hot favourites to end their stay in the Premier League. The Cherries are a 1/10 shot while Aston Villa are slightly shorter at 1/9.

Meanwhile, if you think there are a few twists and turns to come over the last three games, then Watford are 7/2 to go through the trap door and West Ham can be backed at 7/1. Brighton are assumed safe by the bookmakers with 80/1 on offer for their unlikely relegation.