Snow falls more frequently on the UAE’s scorched land than its homegrown players are exported to Europe.

But October contained a bold choice from the trailblazing Abdulrahim Ahli to swap life in the Arabian Gulf League for his three-year contract at Latvia’s Spartaks Jurmala.

New experiences are not restricted to the pitch for this buccaneering Emirati right-back who has racked up three appearances for the fourth-placed side in the coronavirus-disrupted 2020 Virsliga. The ex-Al Ahli, Al Wahda and Dibba Al Fujairah competitor is also becoming, with the help of video calls, a domestic god.

“Some people, they need to sacrifice,” the 25-year-old tells Sport360 from his pristine apartment in Jurmala, a tranquil resort town 25 kilometres west of Riga. “In my country, you are born in the UAE and you grow up with a maid, they wash your clothes, they do everything for you.

“But when you come to Europe, you do everything. I wash, I clean all my apartment…

“This gives me a strong personality. Little things, that people don’t understand.

“This is the first time I cleaned and cooked. I never used to do this.

“Every time I call my mum or sister by video call and they tell me: ‘Put this in, put this in…’

“You will stay in the UAE, you will think: ‘I don’t want to sacrifice, I live a good life, I earn good money, I’ve got a good car…’

“They will think like this. I knew, for sure, when I transferred to Europe that everyone will say: ‘Why do you want to come?’”

A talent void has not enforced such reticence. A luxurious lifestyle, combined with reluctance from prospective foreign employers to pay requisite sums, has prevented multitude of skilful footballers taking this substantial step.

The select few who headed westwards include Hamdan Al Kamali, whose loan to Lyon in 2012 featured eight run-outs for the French giant’s second string. Brother Hamid then became the first of his countrymen to feature in the UEFA Champions League’s preliminaries during a temporary stint at Malta’s Valletta FC in 2014.

Work-permit issues scuppered the celebrated Omar Abdulrahman’s switch to Manchester City after a stand-out London Olympics 2012 led to his successful trial, while international colleague Amer Abdulrahman – no relation – would fair less well a year later during his brief stint at Blackburn Rovers.

An approach from an unnamed Bundesliga club came to nothing for UAE record-scorer Ali Mabkhout in the wake of his Golden Boot achievement at Asian Cup 2015. Ali Al Ameri, though, found a surprising new home in April 2018 at Blyth AFC of the English pyramid’s 10th tier.

How did this latest foreign foray occur? Ahli appeared an unlikely adventurer.

An unremarkable tally of 18 AGL matches was notched in five years. The bulk of these occurred at relegation-bound Dibba in 2018/19, prior to his contract at Wahda expiring.

Well-connected friend Waged Alchadli and agent Walter Fernandez helped. But his intriguing story underlines the importance of desire and focus.

Ahli explains; “I was playing at Dibba Al Fujairah in the top league, on loan from Al Wahda. I had one friend here with me [Alchadli] and he came to see the game and said: ‘Abdulrahim, I will take you to Europe.’

“Then I began thinking about Europe. I told him I need to go to Europe. 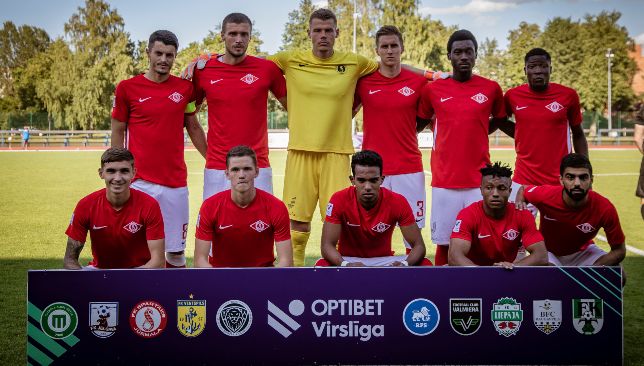 “I was pushing very hard to go. I keep waiting, waiting.

“I thought I might move to Switzerland and I got a lot of offers from the UAE, but I said I won’t change my mind and I want to move to Europe.

“In October, an offer for me came from Kosovo. I said I don’t care about money, I just want to sign.

“I trained, but then the next day another offer came from Latvia. It was a good club and I said I will sign and I will go.

“It happened very fast and now I am here.”

January and February were spent in Turkey with new team-mates, immersing himself in a new way of playing. This preparatory work was curtailed, however, when Covid-19 dictated March’s postponement of Latvia’s top flight after one round.

Subsequent travel between the two nations meant Ahli was forced to play catch-up when back at Spartaks in June. A belated first-team bow arrived in July 7’s 1-1 draw against FK Tukums, with two more run-outs being recorded since.

“We stated the league, again, in June,” Ahli says.

“I was at home [in the UAE] and waiting for the approval from my country to travel. The UAE people were only allowed to travel for work, so I waited for a month and a half.

“The team had been training for two months when I came back. I’ve trained for the team, now, for two months and a lot of the players were more ready than me.

A single conversation with the affable defender is all that’s required to discover why he chose this rare move.

Time spent at the Al Wasl and Ahli – as they were known before May 2017’s amalgamation to become Shabab Al Ahli Dubai Club – academies helped hone his abilities. First-hand experience of the professional game was then imparted by older brother Omran Abdulrahman, currently a midfielder for First Division League’s Dibba Al Hisn.

He, also, bashfully apologises for his English throughout the interview. He shouldn’t, it’s excellent.

“When they see you are from Dubai, they think I am rich, have two towers,” Ahli says. “They ask me ‘how did you come here and why not stay in the UAE?’

“A lot of players in Latvia ask me why when there is good money in the UAE? But I tell them I wanted this challenge, for me.

“Nobody attacks me. Never, never.

“It’s quiet and the people here are nice. It is not like the UAE, but it is good.

“I haven’t discovered more of Latvia, because every three days we have a game at the moment. It is hard to go into another city.

“We played some games three or four hours out of my city. It looks very nice.

“My city, Jurmala, is also near to the beach.” 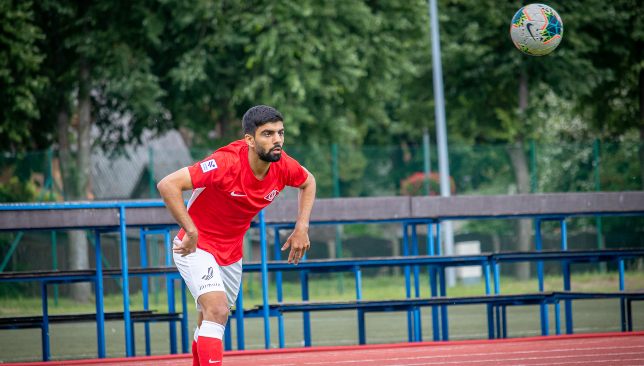 Latvia is not an obvious landing place. FIFA rank their national side 66 places below the UAE in 137th, while their club sides barely make an impression on the continent.

Premier League viewers of a particular vintage will recall Marian Pahars’ scoring streaks at Southampton either side of the Millennium, while Arsenal supporters still recoil about memories of Igor Stepanovs and an infamous 6-1 routing by Manchester United.

Exposure to different brands of football, however, is paramount in Ahli’s mind.

He says: “Every team we play against, they are different. One team can be very strong, physical and all the players are 190 centimetres [tall].

“But the other teams are running more. Every team has different football in this country.

“If you train with these players, you improve. If you play against players who are stronger than you’ve seen before, you improve.

“Day-by-day, you get much better – and every three days is a game.”

Ahli has not appeared on the UAE’s radar. Could his foreign exploits force Jorge Luis Pinto, their fifth boss in three years, to take a look?

Ahli replies: “I don’t think like this, that now I play in Europe it will be easy to go to the national team.

“Then, they will decide. I want to go to the national team when I am stronger.

There were few footprints for Ahli to walk in when Latvia called. His ambitious decision to escape the AGL’s enviable environment has been rewarded with a different kind of riches – life experience.

Don’t, also, make the mistake of thinking Spartaks are a destination. For him, this is just one stop on a journey into the refreshingly unknown and unfamiliar.

Ahli states: “From Latvia, you can go to Switzerland or Italy’s second division.

“You can also go Czech Republic or Hungary. It is important to go step-by-step.

“A lot of people from Latvia went to Russia or Ukraine. It is a good step.

“You want to see how you are, at this level.

“Here, they want to develop players. This is the club’s strategy.

“A lot of players go on loan to a good league and after they will buy them.”