Dillian Whyte’s pursuit of a world title fight will be ended by a crushing defeat to Alexander Povetkin, says the Russian’s last opponent Michael Hunter.

Whyte is within touching distance of a mandatory shot at the WBC heavyweight belt currently held by Tyson Fury, but he must firstly overcome Povetkin this Saturday, live on Sky Sports Box Office. 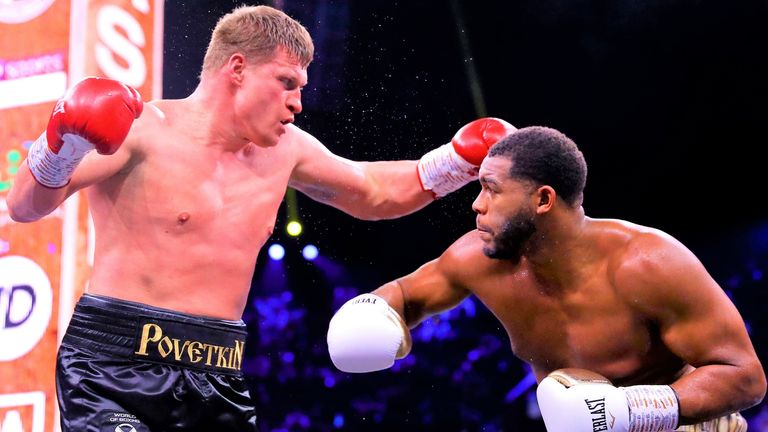 Povetkin has only lost to Wladimir Klitschko and Anthony Joshua, while he battled to a draw in his last fight with Hunter, who is predicting a disastrous night for Whyte.

“Povetkin will be there to get him. The fight will be at a decent pace. I think it’s going to be an interesting fight to see, because the pace is going to be very similar, so I’m probably going to lean towards Povetkin.”

“I think it’s [knockout win for Povetkin] very possible. The percentage is high and that’s why I think this is a good fight, because people want to see explosions and I think they’re going to get it here, even if it’s for two minutes, or it might be for the whole fight.

“We’re looking for big punches thrown and I think that’s what the fans are excited to see.”

Hunter troubled Povetkin with an early onslaught, but the big-hitting veteran staged a determined fightback to prevent defeat on the undercard of Anthony Joshua’s rematch win over Andy Ruiz Jr in Saudi Arabia last December.

“He has a veteran experience that goes with him in the ring, definitely,” said Hunter.

“Very subtle things that he knows what to do. He has a heart of a lion, that’s for sure. Just that alone, a very difficult situation to deal with.

“If you don’t knock him out, then he’s not going to be knocked out. He’s not the one to worry about what should happen in that situation.”

Watch Whyte-Povetkin and Taylor-Persoon 2 on Saturday, live on Sky Sports Box Office, from 7pm. Book it via your Sky remote or book it online here. Even if you aren’t a Sky TV subscriber you can book and watch it here.