Zak Crawley completed a superb maiden Test hundred to lead England to a mammoth 332-4 after day one of the third and final #raisethebat Test against Pakistan at The Ageas Bowl.

Crawley (171no) spoke during the weather-wrecked second Test in Southampton about how he “pinched himself” at night thinking about a first century – but the moment became reality from 171 balls in his eighth Test.

The 22-year-old’s assured innings at No 3, which featured strokes all around the wicket, including a first-ball boundary, and unbroken 20 stand with Jos Buttler (87no) rallied England from 127-4 and sapped Pakistan, who are 1-0 down in the series. 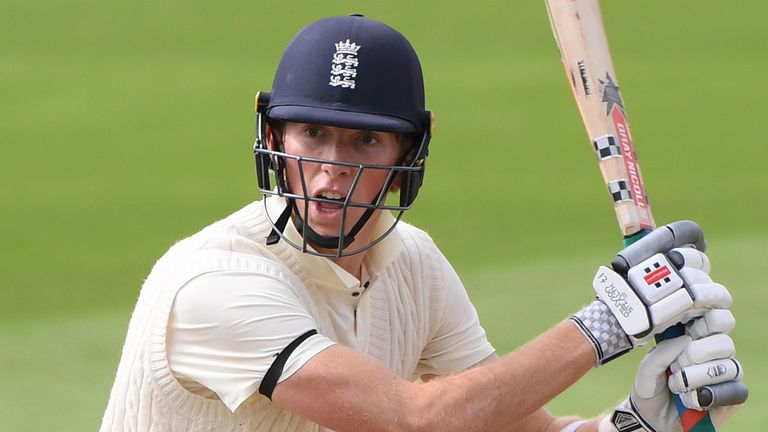 Crawley hit his third Test fifty on the final day of last week’s drawn match at The Ageas Bowl and built on that outstandingly, reaching 150 from 233 balls and then moving past his previous best first-class score of 168, which he had amassed for Kent against Glamorgan.

England will seal a first Test series win over Pakistan since 2010 if they avoid defeat and Crawley and Buttler – the latter having struck an 18th Test fifty – have given them a superb platform after a wind-swept day on the south coast, one on which leg-spinner Yasir Shah (2-107) bowled 28 overs.

All eyes were on England’s bowling attack at the toss – which was delayed by 10 minutes due to a brief shower – where captain Joe Root confirmed paceman Jofra Archer would return in place of all-rounder Sam Curran having been rested for the second Test at the same venue.

But when Root opted to bat after calling correctly, attention turned to the top order, who went on to have mixed days against unchanged Pakistan.

Rory Burns (6) snicked Shaheen Afridi behind in the fifth over as his tough series continued – the left-hander averaging five with a top-score of 10 and left-arm quick Shaheen responsible for three of his four dismissals.

Dom Sibley (22) fared better, contributing 16 in a second-wicket stand of 61 with dominant partner Crawley before he was pinned lbw by Yasir after advancing down the pitch looking to whip into the leg-side – Sibley’s failed review showing middle stump would have been knocked back.

Crawley was England’s star, though, with a fluffed sweep off the impressive Yasir and a ballooned pull off Shaheen his only real jittery moments as he completed his fourth first-class hundred after three previous for Kent.

His brisk tempo meant England rattled along at around four an over at one stage in the opening session – that dipped as Crawley spent 16 balls on 49 before sealing his fifty from 80 deliveries on the stroke of lunch with a gorgeous off-drive for four off Shaheen.

The right-hander looked like he might notch his century in the final over before tea but walked in for the second break of the day three runs shy.

Crawley was celebrating a hundred six deliveries later, though, when he stabbed Mohammad Abbas through the covers for the century-sealing two and shook hands with Buttler, the man with whom he bossed Pakistan’s attack during the second half of the day.

Pakistan – unbeaten in their last four Test series against England – were in a decent position 50 minutes into the second session, with Root (29) and Ollie Pope (3) falling after the lunch break.

Root was out to a peach of a delivery from teenager Naseem Shah, which seamed away late to take the edge, although the catch from wicketkeeper Mohammad Rizwan was also superb as he leapt to his right across first slip.

Pope, though, will be frustrated by his exit as for the second time in two games he came unstuck playing on the back foot against a delivery from Yasir that skidded on – Pope lbw last time out but bowled this time around.

Crawley and Buttler dug England out of that hole and put Pakistan into one of their own as the tourists failed to take a wicket in the final session.

Yasir’s impact deteriorated to the point where he was blazed for two sixes in one over by Buttler, while Pakistan also went wicketless from 10 overs with the second new ball in a game they must win.

Watch day two of the third and final #raisethebat Test between England and Pakistan live on Sky Sports Cricket from 10.30am on Saturday.