One of my favorite things anyone has said in the buildup to the UFC 254 main event this weekend came from Khabib Nurmagomedov as he was discussing being on “Fight Island.”

Nurmagomedov (28-0, 12-0 in the UFC) will be looking to unify his lightweight championship against interim belt holder Justin Gaethje (22-2, 5-2 UFC) on Saturday in Abu Dhabi, United Arab Emirates — in an event that will happen in the afternoon, U.S. time (pay-per-view main card at 2 p.m. ET). In a recent interview with ESPN, the champ basically outlined all the reasons why he shouldn’t be there. Those included COVID-19 testing, weight cutting, interviews and pressure. Frankly, a lot of stuff he could do without.

The UFC 254 main event will feature one of the most highly anticipated fights of the year, with interim lightweight champion Justin Gaethje meeting world champ Khabib Nurmagomedov. Gaethje has won four straight, including three first-round finishes, while Nurmagomedov (28-0) looks to remain undefeated. Middleweights Robert Whittaker and Jared Cannonier will square off in the co-main event.

“Why I come here?” Nurmagomedov said. “Everything that’s happened the last four months, everything going on with COVID, why I need this fight? I already one of the greatest, one of the best fighters of all time. I have money. I have name. I have business. I have family, kids. I have everything. Why I need fight?

“I have only one thing why I’m here. I really want to compete with high-level fighters in the world. Justin Gaethje, right now, interim champion, lot of people talk he can beat me. OK, that’s why I come here, even after what happened last four months.”

Yes, Nurmagomedov is the undefeated champion, the one looking to move to 29-0 this weekend and then, potentially, 30-0 before retirement. Everyone loses in MMA — that’s what we always say. It’s virtually impossible to walk away from the highest level with a perfect record. But Nurmagomedov is challenging that assertion, and that makes every one of his fights significant.

In a very big way, though, this fight at UFC 254 feels massive also because of Gaethje. Who would have ever thought, at the beginning of 2020, we could move on from a canceled fight between Nurmagomedov and Tony Ferguson and never look back? We had waited five years for that Ferguson fight, which was booked five times, and it never happened. But we’re OK with it because of what Gaethje did to Ferguson back in May.

And by the way, don’t forget that Gaethje nixed the idea of fighting Conor McGregor this summer because a title fight against Nurmagomedov was far more important to him. How about that? Just about every fighter in the world would love to face McGregor, except the two who are fighting this weekend, Nurmagomedov and Gaethje.

In a sport that is driven by storylines, rivalries and often the “money fight,” this main event feels almost wholesome in a way. Not to mention, refreshing.

0: Gaethje fights in the UFC that have ended in any result other than a KO/TKO. He has knocked out five opponents and been KO’d by the other two. The five knockouts leave Gaethje just two behind the active leader among lightweights, Edson Barboza (a Gaethje KO victim, by the way). Gaethje has had seven UFC bouts, Barboza 24.

57: Takedowns in the lightweight division by Nurmagomedov, the most among active UFC 155-pounders. And the champ does something with those takedowns. He has landed 308 ground strikes during his UFC career, the most ever by a lightweight.

12: UFC victories for the unbeaten Nurmagomedov. A win Saturday would put him in a tie with Jon Jones, Demetrious Johnson and Max Holloway for the second most all time, behind Anderson Silva (16).

7.74: Significant strikes landed per minute by Gaethje, the most in UFC history. And the challenger is accurate, too, landing 59.2% of his attempts, best ever for a lightweight. That accuracy is important against a forward-moving takedown machine like Nurmagomedov. A swing and miss could result in Gaethje being taken to the canvas and smothered for the rest of the round, if not worse.

17: Seconds that Gaethje has spent in bottom position during his seven UFC fights (two takedowns). That is just 0.4% of his total fight time, giving him the third-smallest percentage of bottom position time in lightweight history. Gaethje’s takedown defense and ability to scramble back to his feet are going to be tested early and often Saturday.

The most important number of all for MMA fans:
UFC 254’s unusual morning start time — don’t miss it

11: Morning kickoff (ET) for early prelims on ESPN+, with more prelims at noon on ESPN2, ESPN Deportes and ESPN+, followed by the six-fight main card at 2 p.m. on pay-per-view (which fans can purchase via ESPN+).

Unlocking Victory breaks down how effective Khabib Nurmagomedov is going for takedowns against the cage and how Justin Gaethje can counter.

On Unlocking Victory, Dominick Cruz breaks down how Justin Gaethje’s forward presssure open up opportunities to use his powerful right hand. 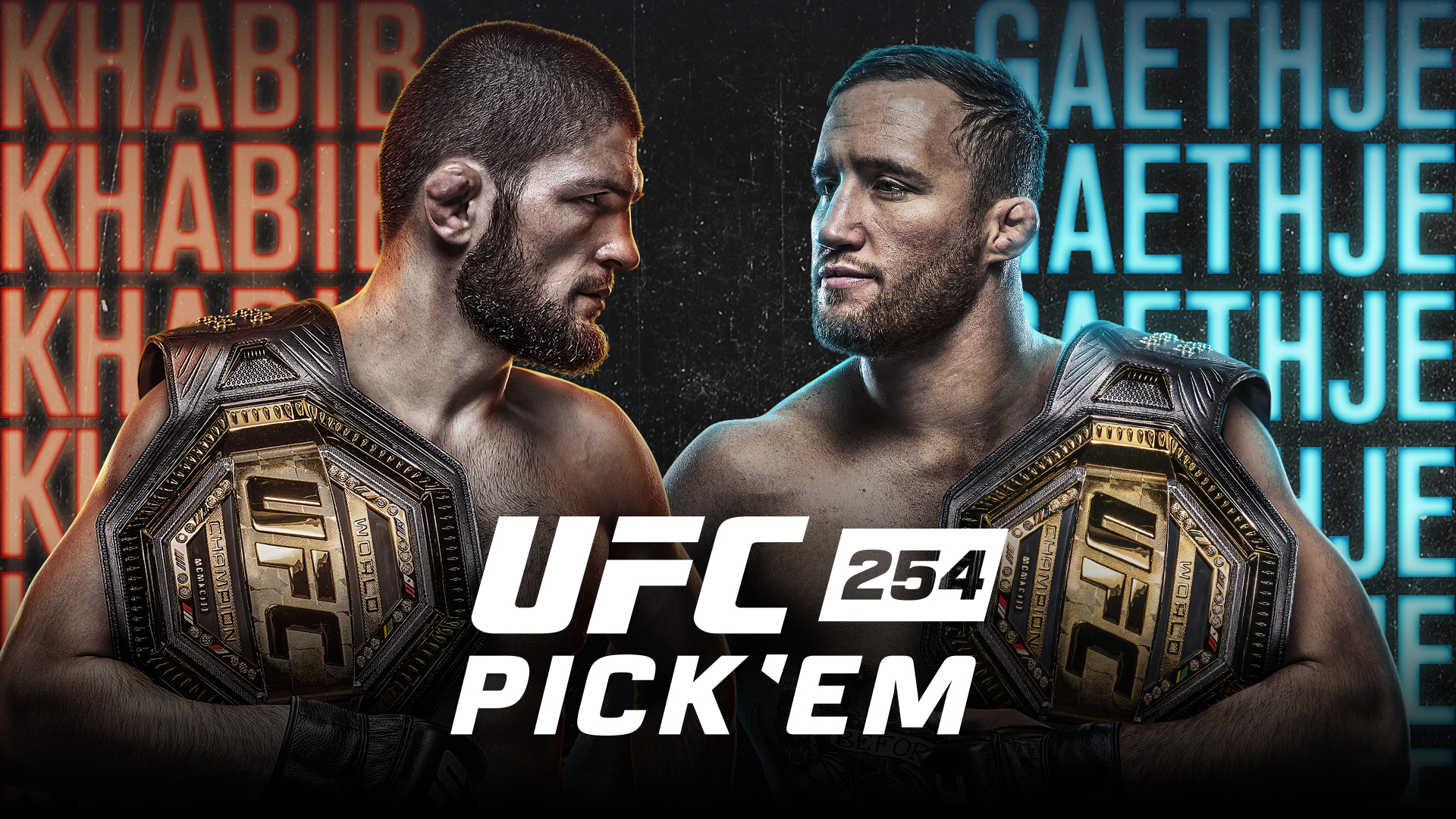 Play for FREE and compete for a chance to win $5,000! Make Your Picks

If you go by the betting odds, oddsmakers do not see Gaethje as Nurmagomedov’s greatest challenge. The champ is a bigger favorite now than he was against Dustin Poirier and Conor McGregor in his last two fights, and even Edson Barboza years ago. But to me, Gaethje poses the biggest threat to date. And I think part of that is due to timing. Gaethje seems to be at the absolute pinnacle of his career. I’m not sure he’ll ever be any better (or more confident) than he is right now. And as dominant as Nurmagomedov is, I can see a clear path to victory for Gaethje. He has the cardio, the finishing ability, the wrestling background. I will not be shocked if Gaethje wins this fight. I can’t bet against Nurmagomedov, though; it’s impossible to do. In his toughest fight to date, Nurmagomedov via decision.

How to watch the fights

Don’t have ESPN2 or ESPN Deportes? Get instant access.

Don’t have ESPN+ for the prelims and PPV? Get it here.

Purchased the fight on your phone and want to stream on your TV? Find out how here.

1. Jared Cannonier, who faces former middleweight champion Robert Whittaker in the co-main event, has an 84.6% finish rate (11 finishes in 13 wins). Nine of those finishes have been knockouts, including in his three most recent fights. Champion Israel Adesanya has already said he would like to next face Cannonier, No. 5 in the ESPN middleweight rankings, if he can get past the second-ranked Whittaker, whom Adesanya beat for the title last October.

Monday through Friday, host Pablo Torre brings you an inside look at the most interesting stories at ESPN, as told by the top reporters and insiders on the planet. Listen

2. Walt Harris has 13 knockouts in 13 career victories. That’s perfection. Perhaps related to that, he has the third-shortest average fight time among active UFC heavyweights (6 minutes, 41 seconds). His opponent, Alexander Volkov, is ESPN’s eighth-ranked heavyweight. Volkov has the third-highest significant strike differential in division history (2.35 landed for every one absorbed), according to UFC Stats.

3. Lauren Murphy, No. 6 in the ESPN women’s flyweight rankings, was scheduled to face fifth-ranked Cynthia Calvillo, but Calvillo dropped out because of a positive COVID-19 test. She was replaced by Liliya Shakirova, who will be making her UFC debut. Shakirova (8-1) is on a three-fight winning streak. Murphy has won four of five since moving down from bantamweight, where she was 1-3.