Wrapping up the Arsenal transfer news, rumours and gossip in the 2022 January window.

Who have Arsenal been linked with?

Arsenal are potential suitors for Aston Villa’s Douglas Luiz with Mikel Arteta keen to add some defensive strength to his central midfield options. (The Sun, January 2)

Arsenal are in talks with Lyon over a move for £38m-rated midfielder Bruno Guimaraes, a key target for the club’s technical director Edu. (Daily Star, January 1)

Juventus have slapped a price tag of around £29.4m on Arsenal and Tottenham target Dejan Kulusevski ahead of the upcoming January transfer window, according to reports (Daily Express, December 30).

Denis Zakaria has told Borussia Monchengladbach he will quit the club in the summer – with Arsenal already expressing an interest (The Sun, December 30).

Arsenal are reportedly ‘ready to sell’ Pierre-Emerick Aubameyang in the January transfer window and already have two replacements eyed up – Fiorentina’s Dusan Vlahovic and Everton’s Dominic Calvert-Lewin (Daily Star, December 27); Arsenal and Tottenham are on red alert after Vlahovic reportedly turned down a lucrative contract offer from Fiorentina (The Sun, December 16); Pierre-Emerick Aubameyang’s demotion as Arsenal captain has presented transfer chief Edu with even greater urgency to complete the signing of Vlahovic (Daily Express, December 16); Fiorentina would prefer to sell Vlahovic to the Premier League over striking a deal with Juventus in a major boost for Arsenal, Tottenham and Manchester City, it has emerged (Daily Express, December 6).

Juventus are waiting to hear back from Arsenal after offering midfielder Arthur on loan to the Gunners (Daily Express, December 24).

Lille midfielder Renato Sanches says he will evaluate any offers that are sent his way and says “maybe” it is Arsenal and AC Milan who are interested in him (Daily Mirror, December 7).

The latest players linked with an Arsenal exit

Middlesbrough are one of a number of Sky Bet Championship clubs interested in taking Arsenal striker Folarin Balogun on loan (Sky Sports, January 1).

Arsenal’s Ainsley Maitland-Niles has reportedly agreed personal terms with Roma (The Sun, December 30); An agreement that would see Maitland-Niles go to Roma on Loan until the end of the Season, is getting closer. Roma need reinforcements, but have not budgeted to spend big this January, so loans are the main option (Sky Sports News, December 28)

Arsenal wonderkid Charlie Patino is being tracked by Barcelona (The Sun, December 23).

Newcastle are reportedly ‘in the mix’ for Pierre-Emerick Aubameyang though the frozen-out Arsenal forward is believed to be eyeing up a different destination (Daily Star, December 28); Arsenal want to use next month’s Africa Cup of Nations as a period to reset relations with Aubameyang (The Sun, December 22). Barcelona have been alerted by Aubameyang’s exile at Arsenal and would be interested in signing him on loan next month (Daily Mail, December 21); Barcelona’s hopes of signing Aubameyang could depend on him keeping a promise he made to his grandfather that he would one day play for their fierce rivals Real Madrid (The Sun, December 17)

William Saliba has refused to reveal where he will be playing next season as he snubbed a question over his Arsenal future (The Sun, December 13).

Arsenal are facing a battle to hold onto rising strike starlet Khayon Edwards amid mounting interest from clubs in England and abroad – including London rivals Chelsea (Daily Mail, December 13).

Arsenal striker Folarin Balogun is pulling the scouts to his games – with French side St Etienne joining the hunt for him (The Sun, November 28).

Arsenal midfielder Mohamed Elneny has emerged as a possible January target for Newcastle (The Sun, December 10); Elneny’s father has played down talk that his son’s contract with Arsenal, which expires at the end of the season, was about to be terminated early (Daily Mirror, November 29).

Please use Chrome browser for a more accessible video player 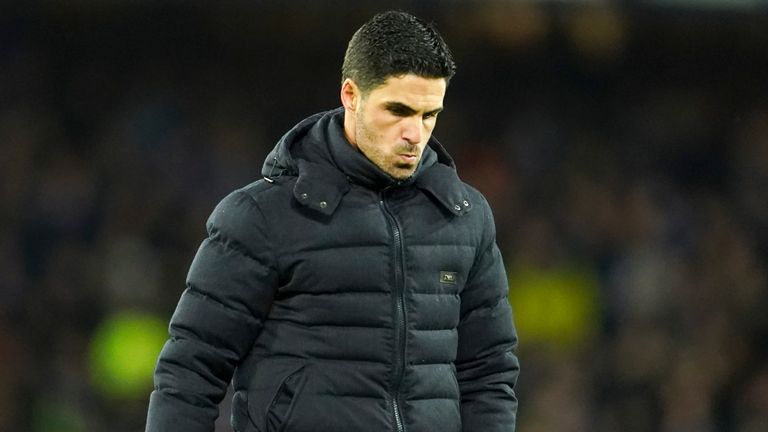 Gary Neville feels that something is brewing between Mikel Arteta and Aubameyang after the captain started on the bench for their defeat against Everton, suggesting their relationship could turn sour

Who will be on the move in January?

The January transfer window opens on Saturday January 1, 2022 and closes at 11pm on Monday January 31.

Keep up-to-date with all the latest transfer news and rumours in our dedicated Transfer Centre blog on Sky Sports’ digital platforms. You can also catch up with the ins, outs and analysis on Sky Sports News.